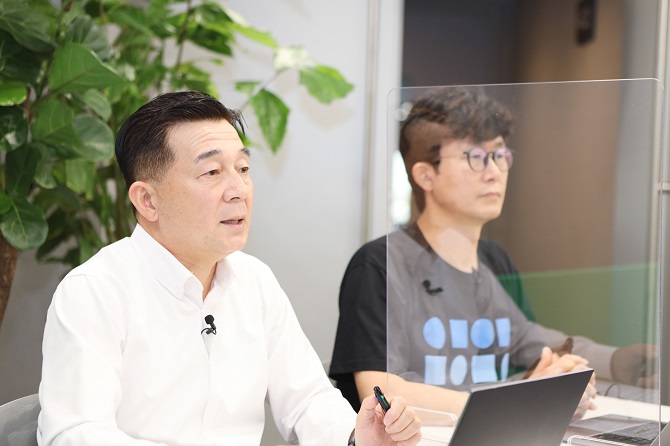 This image, provided by Naver Cloud, shows Kim Tae-chang and Jang Beom-sik, two officials, during an online conference on Sept. 16, 2021.

SEOUL, Sept. 16 (Korea Bizwire) — The cloud affiliate of South Korea’s leading internet portal operator, Naver Corp., said Thursday it aims for the No. 3 position in the Asian Pacific region by 2023.

“We aim to reach the No. 2 position in the country, and No. 3 in Japanese and Southeast Asian markets by 2023,” Jang Beom-sik, an official of Naver Cloud, said during an online conference.

“We aim to secure the new growth engine by investing 80 percent of our annual sales into technology and human resources.”

Naver Cloud’s sales came to 273.7 billion won (US233.8 million) last year, up 41 percent from a year earlier, officials said, adding the company is forecast to reach over 400 billion won in sales this year.

“Cloud computing is one of the important growth engines of Naver,” said Kim Tae-chang, a senior Naver official said, adding the company aims to target the global market with its unique technology.

Naver began its cloud computing service in 2017 with 22 basic services, including data computing and security management, for both individual users and corporate customers. The service now expands into 189 products in 18 categories.

Naver said over 50,000 local clients use its cloud computing service, including over 55 percent of the country’s top 100 conglomerates.