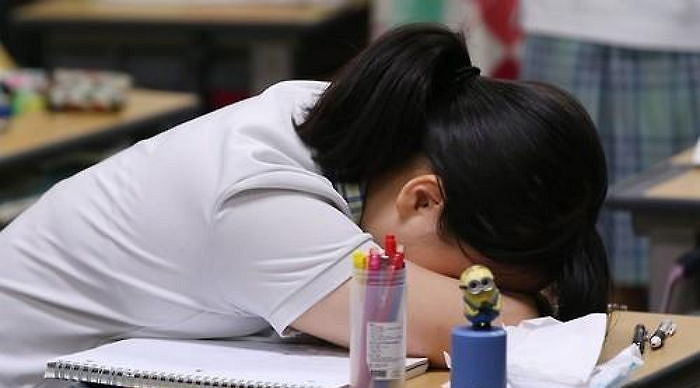 According to the results, 33.8 percent of the students polled said they had considered committing suicide over the previous year.

The biggest reason was the pressure they felt over academic achievement, with 37.2 percent of those who experienced the impulse to commit suicide giving it as the reason.

Anxiety about their future career was cited as the second biggest reason at 21.9 percent, followed by family conflict at 17.9 percent.

The survey also showed that 45.6 percent of South Korean adolescents spend more than three hours studying every day, while 44.2 percent said they have less than two hours of leisure time daily.

Nearly one out of four adolescents said they never exercise, the survey also showed, revealing the dire lifestyles many adolescents are subject to.

Due mainly to a wish not to study, 28.8 percent of those who were polled said they dreamed about quitting school, according to the survey.

Some 26 percent of the respondents said their parents had inflicted physical violence on them, and 31.3 percent said they had received verbal abuse from their parents.

Slightly over 12 percent said they had also experienced corporal punishment at the hands of their teachers.

A total of 11 percent of the respondents said they had worked in part-time jobs, but 57.5 percent said they had been employed without a legal labor contract.

About five percent of the respondents also said they’d experienced sexual harassment or teasing by schoolmates over the previous year, but a majority said they could not find any help to resolve the problem.

The survey result indicated that 44 percent of the adolescent respondents were not aware of the existence of the United Nations Convention on the Rights of the Child, while 30 percent said they did not know about the National Human Rights Commission of Korea.

“(The government) needs to expand the routes for securing labor rights for adolescents as recommended by the U.N. Committee on the Rights of the Child,” the institute said.