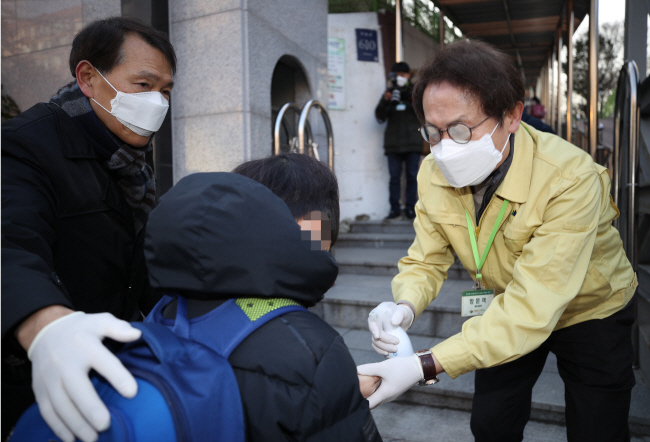 Cho Hee-yeon (R), the superintendent of the Seoul Metropolitan Office of Education, sprays sanitizer on a student’s hands at Bongeun Elementary School in southern Seoul on Feb. 3, 2020. (Yonhap)

SEOUL, Feb. 3 (Korea Bizwire) – A total of 336 schools in South Korea have temporarily shut down or postponed the start of the new semester due to fears of the spread of the new coronavirus, government data showed Monday.

According to the Ministry of Education, 245 kindergartens, 53 elementary schools, 21 middle schools, 16 high schools and one special education school nationwide have halted school operations or delayed reopening after winter vacation as of 9 a.m. as part of emergency measures to prevent the spread of the coronavirus.

Elementary and secondary schools here usually restart in the last week of January or the first week of February after a month-long winter vacation.

The ministry decided over the weekend to allow schools in areas presumed to be vulnerable to the viral disease, or where a confirmed case is reported or a carrier is found to have traveled, to choose temporary closure after prior consultations with regional educational authorities.

In Gyeonggi Province that surrounds Seoul, educational authorities in Suwon and Bucheon ordered all kindergartens and elementary and secondary schools in their jurisdiction to close for a week.

Authorities in Goyang, also in Gyeonggi Province, recommended closures for all its kindergartens for one week.

In Gunsan, a North Jeolla Province city where a confirmed case of the new coronavirus was reported, all kindergartens and elementary and secondary schools were ordered shut for two weeks.

Meanwhile, a total of 21 South Korean students and school officials who have visited China’s Hubei Province, the epicenter of the new coronavirus, over the past two weeks were put under self-quarantine as of 3 p.m. Sunday, the education ministry said.

Separately, 43 Chinese students of local universities and colleges, who were found to have been to Hubei recently, were also put under self-quarantine as of last Tuesday, the ministry added.