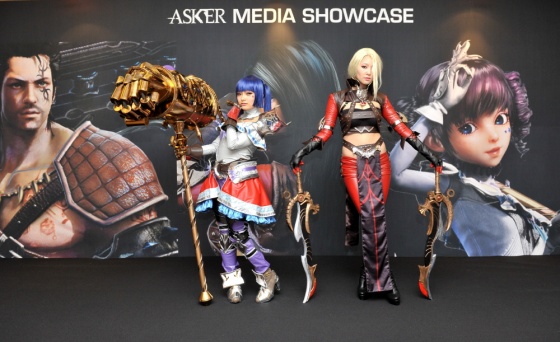 The core strength of ‘Asker’ lies in the strategic collaborative play among real-time users, known as the action RPG. (image: Neowiz Games)

For the first half of the year 2014, Neowiz Games has launched the online games of diverse genres, such as a massively multiplayer game (MMORPG) ‘Bless,’ an online golf game ‘On Green,’ a first-person shooter (FPS) game ‘Black Squad’; it held a media showcase to declare a full-fledged push on the online game market for the second half of the year.

At the venue of JW Marri0tt Seoul, Lee Gi-won, CEO of Neowiz Games, made an opening speech; Oh Yong-hwan, CEO of Neowiz CRS, presented the vision of ‘Asker’; and producer Park Seong-jun, who is in charge of directing all of the aspects in the game development, illustrated the major features of ‘Asker.’

In his presentation, producer Park Seong-jun put a special emphasis on the most endearing features in action role-playing, demonstrating the catchphrase, ‘Asker responds to your action.’ The core strength of ‘Asker’ lies in the strategic collaborative play among real-time users, known as the action RPG that is celebrating both seamless graphic displays and superb action features realized by Havok Physics that allows for real-time collision and dynamics of rigid bodies in three dimensions.

Demonstrating the major contents of the first non-public exhibition test scheduled from October 7 to 10, the producer spoke of his aspirations to make ‘Asker’ an original blockbuster online game.

Lee Gi-won, CEO of NEOWIZ GAMES, said, “‘Asker’ is one of our ambitious products as the next generation growth engine, and in 2013 we already signed a contract to export ‘Asker’ via ChangYou, a leading game developer and operator in China. We ask you to show a lot of expectations and interests when it is released to gamers on this coming October 7.”

Now NEOWIZ GAMES are receiving applications for the first non-pubic exhibition test from September 2 to 23 at its website (http://asker.pmang.com/).
http://gamefocus.co.kr/detail.php?number=37825