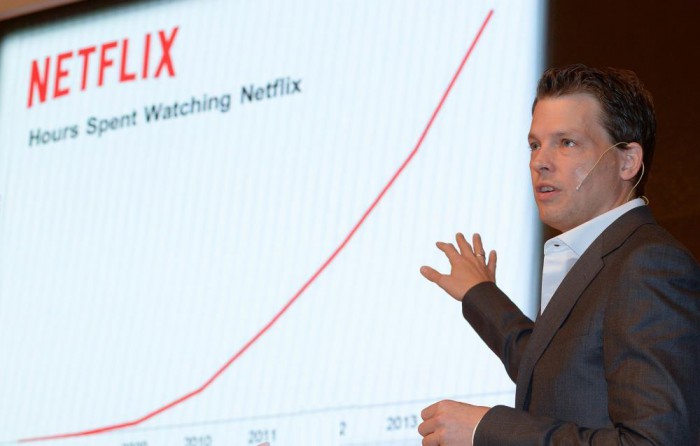 Greg Peters, chief streaming and partnership officer at Netflix Inc., speaks at an event held in Seoul on Sept. 9, 2015, announcing the release of its services in South Korea slated for 2016. (image: Netflix)

“We are very excited about the opportunity more than anything else. There are great opportunities to bring contents from Korea to rest of the world, and bring global contents to consumers (here),” Greg Peters, a partnership official in Netflix, told Yonhap News Agency.

Netflix is an U.S. online on-demand video-streaming provider, which boasts 65 million users around the globe. The service is available in around 50 countries, and the daily streaming length currently stands around 100 million hours.’

The “localized” Netflix service in South Korea will provide subtitles for most of its content.

In line with the move, Peters who is in Seoul for a forum said Netflix will continue to forge ties with various players, from device makers like Samsung Electronics Co. and LG Electronics Inc. to other contents creators.

“We are tremendously excited, and tremendously optimistic to work with old partners in Korea which we have worked for many years, and find new partners,” Peters said.

Highlighting South Korea’s high-end broadband and Internet infrastructure which is crucial in creating the ecosystem for online video providers, he said the country sets a mark for the world to follow in terms of its Internet industry.

When asked if Netflix is concerned over the illegal downloads of contents across the South Korean Internet, Peters said the company’s strategy is to continue to provide users with quality content.

“Giving consumers a high-quality experience has been giving effect in dealing piracy,” Peters added. “We have seen piracy go down in the market we enter.”

“In 2012, we had only one Netflix original show. Today, we have dozens of shows. Shows like ‘Sense 8′ starring Bae Doona,” Peter also said, emphasizing Netflix’s efforts to forge deeper ties with South Korean content creator.

“Korea is well respected for its globally beloved content and innovative consumer electronics, making it a great venue for Netflix as we expand across Asia and around the world,” added Reed Hastings, head of Netflix, in a press release.

Netflix will also be available in Singapore, Hong Kong and Taiwan next year.