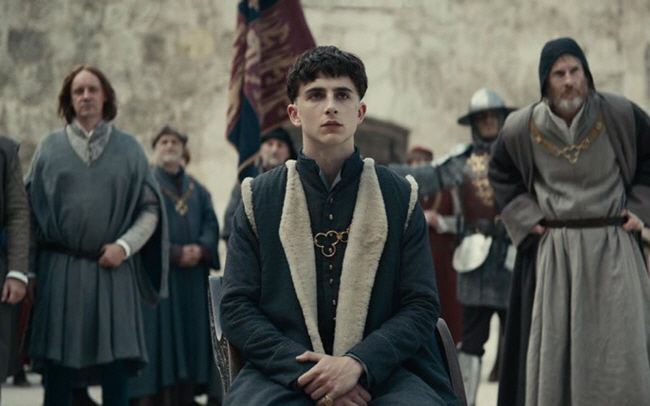 A scene from “The King.” (image: Netflix)

Megabox, one of the three biggest multiplexes along with CGV and Lotte Cinema, said Tuesday that it would screen the Netflix-made film from the next day, nine days before being made available to paid subscribers on Nov. 1.

“The King,” directed by David Michod, is about the life of King Henry V of England, who was forced to take the throne against his will.

It premiered at the Venice Film Festival in August and was also shown at the Busan International Film Festival earlier this month.

It is the first time that a Netflix-produced film has secured theatrical windows at a major multiplex cinema in South Korea.

In the past few years, local multiplexes have boycotted screenings of Netflix movies as the content titan has refused to comply with the traditional practice of the so-called holdback period before putting its movies on its own platform.

In South Korea, films run in theaters for two or three weeks, and theater chains wield the exclusive distribution rights before the content is transferred to other forms of distribution such as video on demand or online streaming services.

Theaters argue that a shorter holdback period discourages audiences from buying a ticket at multiplexes and that they instead wait for films to appear on their streaming services.

In 2017, renowned South Korean director Bong Joon-ho’s 2017 adventure film “Okja,” financed by Netflix, played on the big screen in limited theaters in South Korea due to a strong protest from the major theater chains.

They did not screen Alfonso Cuaron’s “Roma,” the winner of the highest Golden Lion prize at the 2018 Venice Film Festival, citing the short holdback period.

However, Megabox has changed its policy to open the door to Netflix amid a rapidly changing media environment and intensifying competition for bankable content.

“The local over-the-top (OTT) market has been facing fierce competition,” the company said. “We made the decision to meet the demand from our audiences for better screen and sound when they enjoy OTT content.”

In an apparent response, Netflix also came up with the nine-day holdback period for “The King,” far longer than its previous films. “Okja” was released simultaneously in theaters and on its streaming service platform.

Megabox said it is in talks with Netflix to screen three films later this year, including “The Two Popes” by Fernando Meirelles and “Marriage Story” by Noah Baumbach.

The two other multiplex chains, CGV and Lotte Cinema, on the other hand, said they will not join hands with Netflix unless the U.S.-based media giant guarantees a certain period of theatrical run.

“Netflix fixes its release schedule first and wants us to change our screening schedules,” said an official from one of the cinema chains. “Netflix has refused to take on the conventional course of film distributing.”

“The King” attracted 2,023 viewers at Wednesday’s box office, the first day of its release, ranking eighth.