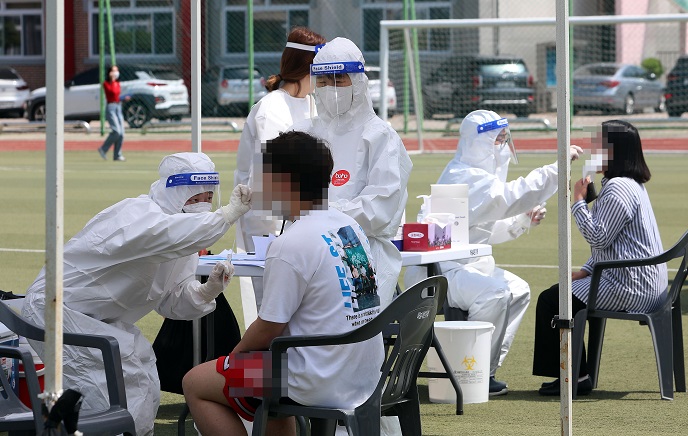 Medical workers collect specimens from students at a makeshift coronavirus testing facility at a high school in Inje, Gangwon Province, on May 13, 2021, in this photo provided by Inje County.

SEOUL, May 14 (Korea Bizwire) — South Korea’s daily new coronavirus cases stayed above 700 for the second day in a row on Friday as the country’s vaccination campaign is again set to gather pace with more shipments of vaccines amid a tight supply.

Daily infections continued to rise this week, jumping to 715 cases Thursday from 635 Wednesday, 511 Tuesday and 463 Monday.

There were two additional virus fatalities, raising the total to 1,893. The fatality rate was 1.45 percent.

Later in the day, health authorities and local governments reported 615 new virus cases as of 9 p.m., down 75 cases from the same time on Thursday.

The upsurge in daily infections came as the country’s inoculation drive has showed little progress due to tight supply of vaccines.

But with more vaccines having arrived in the past two days, inoculation may rev up down the road. On Thursday, 835,000 doses of AstraZeneca’s COVID-19 vaccines, enough for 417,500 people, arrived here.

The country has been stepping up its vaccination campaign since late February with an aim to achieve herd immunity by November.

A total of 3,719,983 people, 7.2 percent of the country’s population, have received their first shots of COVID-19 vaccines since the country started its vaccination program on Feb. 26. On Thursday, 7,139 people received the jabs.

AstraZeneca’s vaccine has been given to 2.04 million people, while 1.68 million have received that of Pfizer. 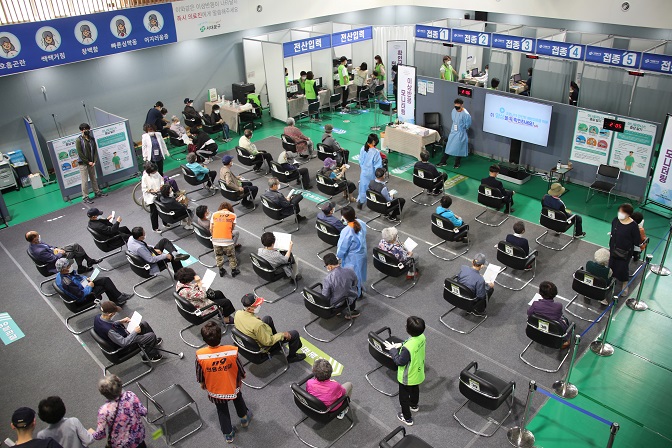 This photo taken May 14, 2021, shows elderly people waiting to see if they have any side effects after getting a coronavirus vaccine at an inoculation center in central Seoul. (Yonhap)

The KDCA said around 8.95 million people between age 60 and 74 will receive vaccination shots in the coming weeks.

Of the locally transmitted cases, 435 cases came from the capital area, with 229 from Seoul, 172 from Gyeonggi Province that surrounds the capital and 34 from Incheon, just west of Seoul.

Cases tied to an entertainment facility in Sooncheon, South Jeolla Province, rose by 25 to 31, with cases involving a church and a gymnasium reaching 62, cases related to a large discount store in Ulsan at 49 and cases connected to a meat processing plant in Gyeonggi Province at 41.

The number of seriously or critically ill COVID-19 patients was 153, down seven from the previous day.

The total number of people released from quarantine after making full recoveries was 120,395, up 489 from a day earlier, with 8,092 people being isolated for COVID-19 treatment.