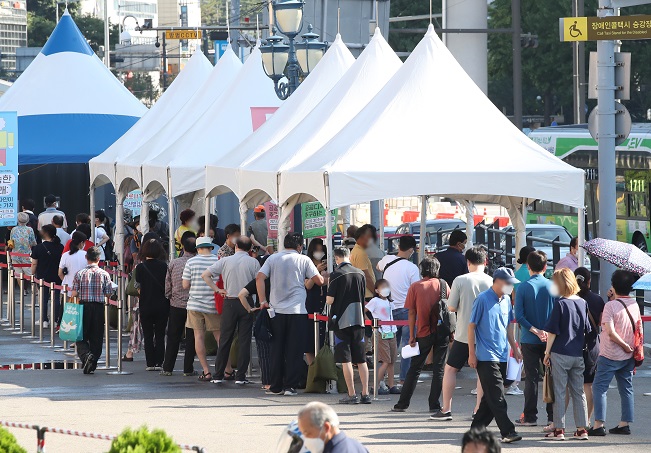 Citizens wait in line to receive coronavirus tests at a makeshift clinic in front of Seoul Station in Seoul on Aug. 7, 2021. (Yonhap)

SEOUL, Aug. 7 (Korea Bizwire) — South Korea’s daily new coronavirus cases bounced back to over 1,800 on Saturday, though the country tightened its vigilance with the extension of stringent virus curbs amid few signs of the situation improving.

The country added 1,823 COVID-19 cases, including 1,762 local infections, raising the total caseload to 209,228, according to the Korea Disease Control and Prevention Agency (KDCA).

The latest caseload marks the highest number since the daily count reached 1,895 on July 28. The tally is up from 1,776 cases reported Thursday and 1,704 on Friday.

The country added three more deaths from COVID-19, raising the death toll to 2,116. The fatality rate came to 1.01 percent.

As of 9 p.m., health authorities and local governments reported 1,569 new cases. The tally is down 72 from the same time Friday but already marked the highest figure for a weekend.

The country previously reported an all-time high of 1,487 new cases for a weekend on July 25. Daily new cases are counted until midnight and announced the following morning.

The daily caseload has remained above 1,000 since July 7 due to outbreaks centered in the greater Seoul area. Cases outside the capital area have also risen amid increased activities in the summer vacation season and the highly transmissible delta variant.

Amid few signs of a letup, the authorities decided to extend the Level 4 distancing measures — the toughest in the four-tier system — for the wider Seoul area until Aug. 22, while non-Seoul metropolitan regions will remain under Level 3.

The Level 4 restrictions ban gatherings of more than two people after 6 p.m., place a 10 p.m. curfew on restaurants and cafes, and suspend the operations of nightclubs and other entertainment venues. 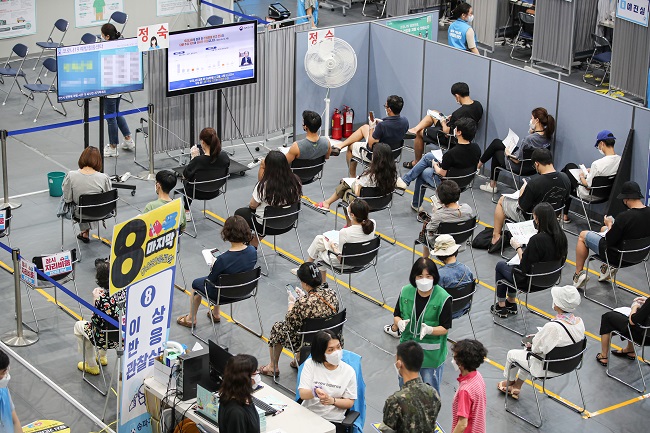 People are monitored for side effects after receiving their COVID-19 vaccine shots at a makeshift vaccination center in eastern Seoul on Aug. 6, 2021. (Yonhap)

Since South Korea kicked off its vaccination program in late February, a total of 20.7 million people, or 40.5 percent of the country’s 52 million population, have received their first shots of COVID-19 vaccines.

Around 15 percent, or 7.68 million people, have been fully vaccinated, according to KDCA data.

In a boost to the nation’s inoculation campaign, more than 1.3 million doses of Moderna’s vaccine arrived at Incheon International Airport, west of Seoul, at 1:43 p.m.

The latest shipment is based on a contract that South Korea signed with the U.S. pharmaceutical company earlier this year to purchase 40 million doses in total. Saturday’s delivery brought the total number of doses that arrived here under the contract to 2.45 million.

From Wednesday to Friday, 5,449 people reported apparent side effects after getting jabs, the health authorities said. Most of the cases involved minor symptoms, such as muscle pain and headache.

Of the total, nine have died, but the authorities have yet to confirm any correlation between their deaths and vaccination.

“President Moon gave stern instructions, considering that there has been distrust among citizens due to many inconveniences that happened during the vaccination reservation period for people in their 50s,” Park said.

There were 61 cases from overseas arrivals, which include South Korean nationals. Of the total, 42 were from Asia, excluding China, and four from Europe.

The total number of people released from quarantine after making full recoveries was 183,789, up 1,737 from a day earlier.

The number of patients in critical condition came to 377, up one from the previous day.