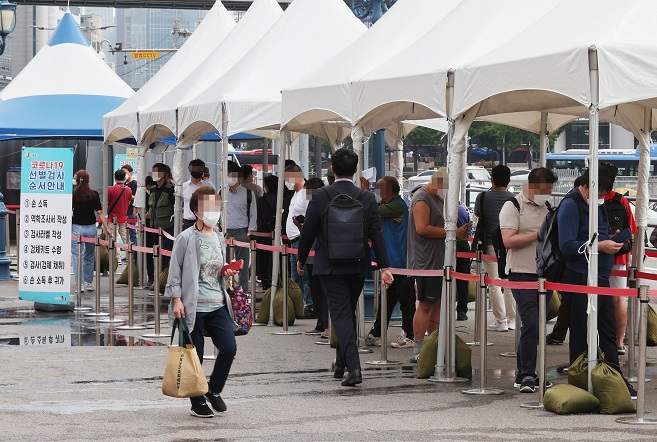 People stand in line to get COVID-19 tests in a screening station in front of Seoul Station on Sept. 10, 2021. (Yonhap)

SEOUL, Sept. 10 (Korea Bizwire) — South Korea’s daily coronavirus cases fell back to slightly below 1,900 on Friday, while authorities are striving to curb the virus surge and raise the vaccination rate ahead of a major holiday when many people travel.

The country added 1,892 more COVID-19 cases, including 1,857 local infections, raising the total caseload to 269,362, according to the Korea Disease Control and Prevention Agency (KDCA).

The latest caseload was down from over 2,000 cases over the past two days.

Daily cases have stayed in the four-digits for the last 66 days amid the fast spread of the more transmissible delta variant nationwide.

The country added five more deaths from COVID-19, raising the death toll to 2,348.

As of 9 p.m. Friday, health authorities and local governments reported 1,714 more cases, down 51 from the same time a day earlier. Daily new cases are counted until midnight and announced the following morning.

The Seoul metropolitan area, home to half of the nation’s 51.3 million population, has emerged as the hotbed of the country’s latest wave of the pandemic, accounting for around 70 percent of the total.

Health authorities have expressed concerns over a further surge in cases during the fall harvest Chuseok holiday, set for Sept. 20-22, when millions of South Koreans travel nationwide.

Ahead of the holiday, authorities decided to extend the current virus curbs — Level 4 in the greater Seoul area, which is the highest in the four-tier system, and Level 3 in other regions — for another four weeks through Oct. 3, limiting the size of private gatherings and restaurant business hours.

Some restrictions have been eased to give leeway to vaccinated people and allow more students to take in-person classes to mitigate the prolonged pandemic’s impact on the local economy.

Authorities said they are considering more incentives for vaccinated people and simplifying the distancing scheme to prepare for a shift in the country’s virus response scheme for a gradual return to normalcy.

Despite the moves to revise the COVID-19 policy, Prime Minister Kim Boo-kyum urged people not to let their guard down against COVID-19 until new infections come down to manageable levels.

“Although new cases in the non-capital area have somewhat declined, they have been rising in the Seoul metropolitan area,” Kim said in a virus response meeting.

“If the virus spreads across the nation during the Chuseok holiday, the fourth wave of the pandemic could go longer and be more serious.” 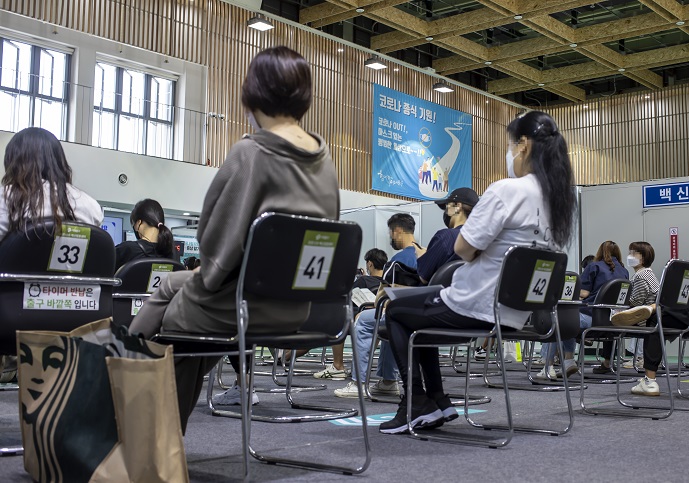 People wait for COVID-19 vaccine jabs at a vaccination center in western Seoul on Sept. 9, 2021. (Yonhap)

Lee Ki-il, a senior health official, said the government issued an executive order to secure additional hospital beds in the non-capital areas, including 146 for critically ill patients and over 1,000 for those with less severe symptoms, to prepare for a potential spike in new cases during the holiday.

Gyeonggi and Gangwon Provinces have been treating more patients with mild symptoms at home since last month, Lee said, noting the government is considering expanding the system to pave the way for revising the virus response system.

The country plans to provide at least one jab to 70 percent of the population by the end of September with hopes of reaching herd immunity in November.

While U.S. President Joe Biden on Thursday imposed stringent new vaccine rules on federal workers, large employers and health care staff, Seoul officials said they will focus on raising the vaccination rate as people are more willing to get their shots compared with Americans.

“Rather than imposing vaccine mandates on certain groups of people, the government plans to encourage as many people as possible to raise the vaccination rate,” Kwon Jun-wook, head of the Korean National Institute of Health, said in a briefing.

To accelerate the inoculation drive, authorities said they will improve the vaccine management system and step up monitoring hospitals to properly administer vaccine doses.

Hospitals that have used vaccine shots over the expiry dates won’t be paid for their inoculations, and those who have received expired doses will be eligible for additional shots within the recommended schedules depending on the type of vaccine, Kwon said.

The latest move is aimed at assuaging public concerns after some hospitals were discovered to have used expired vaccine shots to hundreds of people.

Of the newly confirmed domestic cases, 666 were from Seoul, 603 from the surrounding Gyeonggi Province and 117 from the western port city of Incheon.

Imported cases, which include South Korean nationals, came to 35.

The number of patients with serious symptoms across the country reached 353, down 13 from the previous day.

The total number of people released from quarantine after making full recoveries was 240,733, up 1,813 from a day earlier.