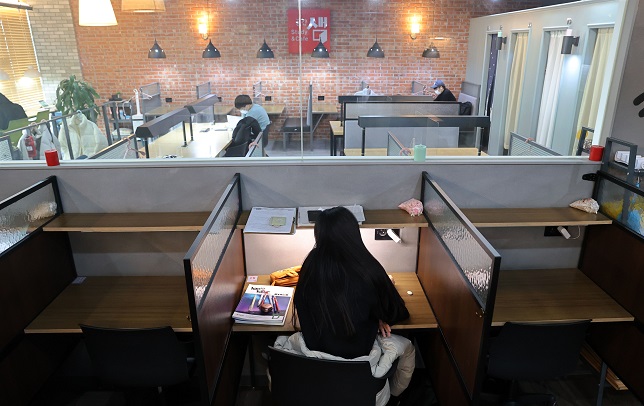 SEOUL, Dec. 6 (Korea Bizwire) — South Korea’s new coronavirus cases fell below 5,000 for the first time in three days Monday as the country reimposed toughened social distancing rules amid concerns over the spread of the omicron variant.

The country added 4,325 new COVID-19 infections, raising the total caseload to 477,358, according to the Korea Disease Control and Prevention Agency (KDCA).

Daily infections soared to a record high of 5,352 cases on Saturday before falling to 5,127 on Sunday.

On Monday, the government began four-week stricter social distancing rules to contain the rapid spread of the coronavirus and the omicron variant.

Under the new measures, which will remain effective until Jan. 2, private gatherings are limited to six people in the greater Seoul area and eight in the rest of the country.

The businesses are given a one-week grace period. Starting next Monday, they will be fined 1.5 million won (US$1,260) if they fail to abide by the new system. The fine can go up to 3 million won for repeated violations.

They can also be ordered to close for good for more than four violations.

Individual violators can be fined 100,000 won each time they violate the vaccine pass system.

The KDCA has confirmed 24 omicron cases, up 12 from a day earlier. Two were from overseas and 10 were confirmed to have locally contracted the virus variant.

Health authorities said those infected with omicron were showing mild symptoms and in a stable condition. They were checking 10 more suspected cases of omicron infection. 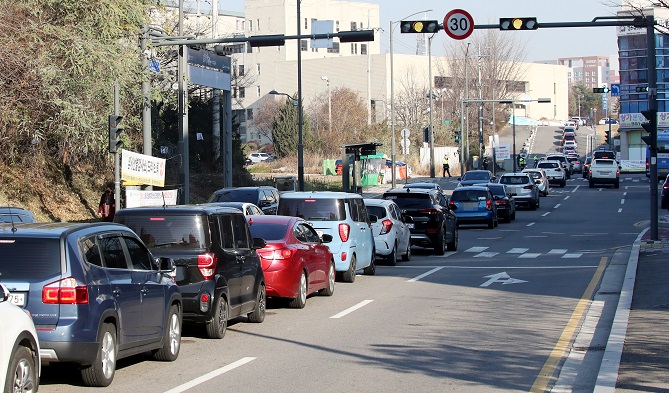 Cars wait in line to get to a drive-through testing site for the coronavirus in Incheon, west of Seoul, on Dec. 6, 2021. (Yonhap)

As of 5 p.m. Sunday, 80.4 percent of intensive care unit beds nationwide were occupied, with the occupancy rate higher in Seoul and its surrounding areas at 86.6 percent.

The KDCA said a surge in infection cases and critically ill patients have pushed hospitals and medical workers to their limits.

The agency said that the risk level over the past week was “very high” nationwide, meaning that all indicators pointed to a serious pandemic situation in terms of the health sector’s responsiveness, infection rates and vaccinations.

A total of 982 COVID-19 patients in the greater Seoul areas were waiting to be admitted to hospital as of the end of Sunday. Among them, 309 people had been waiting for more than four days, according to the KDCA.

Of the total infection cases, Seoul reported 1,408 new cases, while 1,314 cases came from the surrounding Gyeonggi Province and 302 from Incheon, 40 kilometers west of Seoul.

As of 9 p.m. Monday, health authorities and local governments had reported 3,558 additional COVID-19 cases, down 329 from the same time Sunday.

On the vaccination front, 83.1 percent of the country’s 52 million population have at least received one shot of the vaccine, while 80.5 percent have received two shots.

Also Monday, Education Minister Yoo Eun-hae asked parents to get their children vaccinated if eligible, saying that 99 percent of the young children infected with the coronavirus for the past two weeks were unvaccinated.

The ministry said a growing number of students became infected with the virus, with the daily average of infections among students reaching 564.

“Vaccinations are the most effective way to protect the health of a young child, his or her family and society as a whole,” the minister said.