A person is given a dose of a COVID-19 vaccine produced by Pfizer in the southwestern city of Gwangju on July 5, 2021. (Yonhap)

SEOUL, July 5 (Korea Bizwire) – South Korea’s daily new virus cases stayed in the 700s for the third day in a row Monday, as health authorities warned against the spread of the more contagious delta coronavirus variant.

The latest figure is down from 826 on Friday, 794 on Saturday and 743 on Sunday, and a nearly six-month high due to the sharp spike in new cases in the Seoul metropolitan area.

New cases spiked to close to levels unseen since January, when the nation was gripped by the third wave of the pandemic, with many cases from schools, private institutions, restaurants, indoor gyms and entertainment venues.

South Korea reported 659 cases as of 9 p.m. Monday, up from 648 at the same time on Sunday. The country has averaged 746 cases over the past seven days, including six straight days of over 700. The streak may be extended by Tuesday morning.

Numbers tend to be lower on weekend and early in the week because of fewer tests done on Saturday and Sunday, before they tick back up in the middle of the week.

New cases in the greater Seoul area, home to half of the nation’s 51 million population, have accounted for over 80 percent of the total over the past 10 weeks, and nearly half of them were in their 20s and 30s, the KDCA said.

Sohn Young-rae, a senior health ministry official, told TBS radio that the spread of the delta variant, which was first identified in India, is “rapidly increasing” in South Korea.

Currently, the delta variant accounts for about 7 percent of new COVID-19 infections, compared with less than 1 percent two months ago, Sohn said.

A total of 416 patients had been infected with the delta variant in the nation as of Sunday, KDCA chief Jeong Eun-kyeong told reporters. 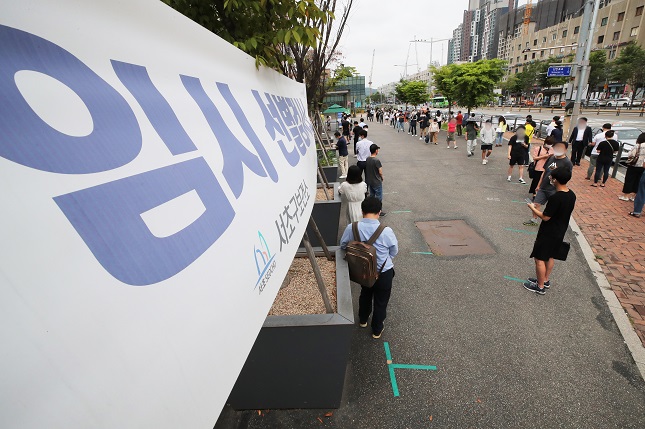 People stand in line to take coronavirus tests at a screening clinic in front of an express bus terminal in Seoul on July 5, 2021. (Yonhap)

Cluster infections at a restaurant in Seoul’s Mapo Ward and a private English education center in Gyeonggi Province have reported 307 confirmed patients and at least nine of them were infected with the delta variant, the KDCA said.

South Korea is at a “critical point” to prevent COVID-19 infections in the greater Seoul area from spreading into other regions, she said.

The nation’s daily average of local COVID-19 infections stood at 655 people over the past week, up 33.2 percent from a week earlier, the KDCA said.

About 80 percent of new infections came from Seoul and its neighboring areas, with people in their 20s and 30s, most of whom are not eligible for vaccinations, fueling new cases, it said.

South Korea had planned to allow vaccinated people to take off their masks outdoors, but the plan was scrapped as new infections jumped in the greater Seoul area.

The KDCA said it eased some guidelines for fully vaccinated people Monday.

Of the newly confirmed domestic cases, 301 were from Seoul, 210 from the surrounding Gyeonggi Province and 16 from the western port city of Incheon.

There were 67 additional imported cases, with 60 of them from Asian nations, excluding China.

The total number of people released from quarantine after making full recoveries was 150,044, up 430 from a day earlier.