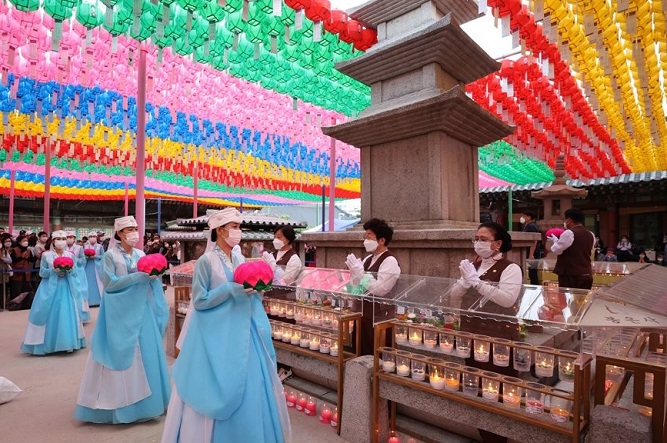 An event with lotus lanterns takes place at Bongeun Temple in southern Seoul on Buddha’s Birthday on May 19, 2021. (Yonhap)

There were eight additional virus deaths, raising the total to 1,912.

Later in the day, health authorities and local governments reported 605 new virus cases as of 9 p.m., up six from the same time on Tuesday.

South Korea has been raising its guard against sporadic cluster infections across the nation amid the rising number of travelers enjoying warm weather.

The country has so far reported more than 1,000 cases of variant strains of COVID-19 from Britain, South Africa and Brazil, with southern cities, such as Ulsan, reporting the most variant cases.

On Tuesday, 15 people were confirmed to have contracted the Indian variant of the virus.

While the country launched its vaccination program on Feb. 26, it has been sluggish in inoculating South Koreans amid the tight supply of vaccines.

As of Tuesday, 1,040,603 people, or 2.3 percent of the country’s population, have been fully vaccinated, receiving both doses of two-part vaccines.

AstraZeneca’s vaccine has been given to 2.05 million people, while 1.7 million have received that of Pfizer. A vaccination center in Seoul is disinfected on May 19, 2021, after reopening earlier in the day following a dayslong closure amid the tight supply of vaccines. (Yonhap)

A total of 23,124 cases of side effects after vaccinations have been reported, up 925 from two days ago, although 95.5 percent of them were mild symptoms.

A total of 140 post-vaccination deaths, up 17 from two days ago, have been reported, although the exact causes of the deaths remain unknown as health authorities could not determine causality.

South Korea’s vaccination campaign put priority on medical workers, elderly people and other populations who were at risk.

As of Tuesday, 49.5 percent of people between age 60 and 74 booked vaccine appointments, the KDCA said.

Under the country’s vaccination blueprint, South Korea aims to inoculate 13 million people by the end of June and achieve herd immunity by November.

Of the locally transmitted cases, 245 came from Seoul, and the surrounding Gyeonggi Province accounted for 159.

The total number of people released from quarantine after making full recoveries was 123,237, up 606 from a day earlier.