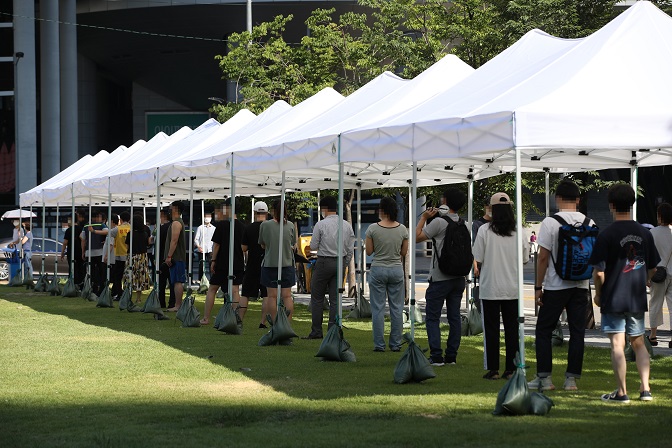 People stand in line to get COVID-19 tests at a screening center in front of Yongsan Station in Seoul on July 20, 2021. (Yonhap)

The country added 1,784 COVID-19 cases, including 1,726 local infections, raising the total caseload to 182,265, according to the Korea Disease Control and Prevention Agency (KDCA).

The latest figure was the highest ever since the country confirmed the first case in January 2020.

The daily caseload has remained above the 1,000 mark over the past two weeks due to the resurgence in the greater Seoul area, and it has been spreading across the nation despite the nation’s vaccination drive.

The country added one more COVID-19 death, raising the death toll to 2,060.

Later in the day, health authorities and local governments said 1,456 new cases were confirmed from 12 a.m. to 9 p.m. Wednesday, 225 fewer than at the same time the previous day.

But if cluster infections from the Cheonghae naval unit are included, the number goes up to 1,726, the largest-ever figure tallied until 9 p.m.

The daily total, to be counted until midnight and announced early Thursday, may breach the 1,800 mark and hit a new high.

The greater Seoul area, home to half of the country’s 51.3 million population, has emerged as a virus hot spot due to continued cluster infections, but new infections in the non-capital area have also risen to take up a record high of 32.9 percent of the total Tuesday.

Health authorities voiced concerns over the fast spread of the delta variant with 951 new cases reported in the previous seven days, which accounted for 76 percent of the 1,252 locally transmitted variant cases.

In response to a sharp hike in new cases in non-capital areas, health authorities tightened virus curbs to limit gatherings of more than four people across the nation, which went into effect Monday for two weeks.

Since last week, the Seoul metropolitan area has been under the highest level of the four-tier distancing measures, which ban gatherings of more than two people after 6 p.m. and place a 10 p.m. curfew on restaurants and cafes, as well as a ban on night clubs and bars.

“The Level 4 distancing measures have not yet flattened the virus curve, but we expect a decreasing number of new patients starting Friday,” Lee Ki-il, a senior health ministry official, said during a briefing.

Authorities said they will expand the ban on large-scale performances in stadiums, parks and convention centers in non-capital areas to prevent mass infections among audience members.

The government will also prohibit new entry of foreign seasonal workers and expand more accurate PCR tests for foreign arrivals, saying it will soon announce the list of countries subject to the new rule. 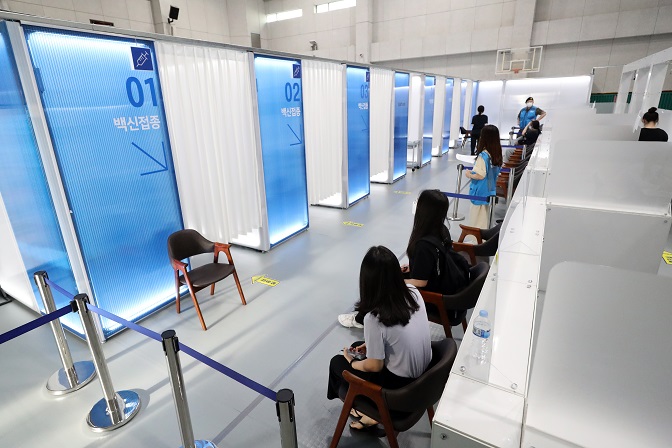 A total of 16.3 million people, or 32 percent of the country’s population, have received their first shots of COVID-19 vaccines and 6.6 million people have been fully vaccinated, the KDCA said.

Following the early vaccine rollout to the elderly population and priority groups, such as medical staff and social service workers, those aged between 50 and 54 can now book their vaccinations online, which will begin next week.

South Korea has confirmed a total of 647 breakthrough cases involving people who tested positive for COVID-19 even after being administered with the full-dose vaccine regimen here, the KDCA said.

Of the total, 364 were administered with Johnson & Johnson’s Janssen COVID-19 vaccine followed by 145 with Pfizer’s and 138 with AstraZeneca’s.

Of the newly confirmed domestic cases, 599 were from Seoul, 450 from the surrounding Gyeonggi Province and 126 from the western port city of Incheon.

The southeastern port city of Busan and its surrounding South Gyeongsang Province reported 100 and 86, respectively, as more people tested positive after going to entertainment venues.

Imported cases came to 58, with 11 from Uzbekistan and 10 from Indonesia.

Additional tests on the 301 members of the anti-piracy Cheonghae naval unit, who returned home from Africa on Tuesday after mass infections, discovered 23 more cases, raising the total to 270, the central disaster response team said, noting the figures will be added to the daily caseload to be announced Thursday.

Currently, 14 patients are hospitalized for treatment, with two of them showing severe symptoms in need of oxygen masks, and more than 200 others show mild or no symptoms, it said.

The total number of people released from quarantine after making full recoveries was 160,634, up 1,287 from a day earlier.

The number of patients in critical condition came to 214, up seven from the previous day.