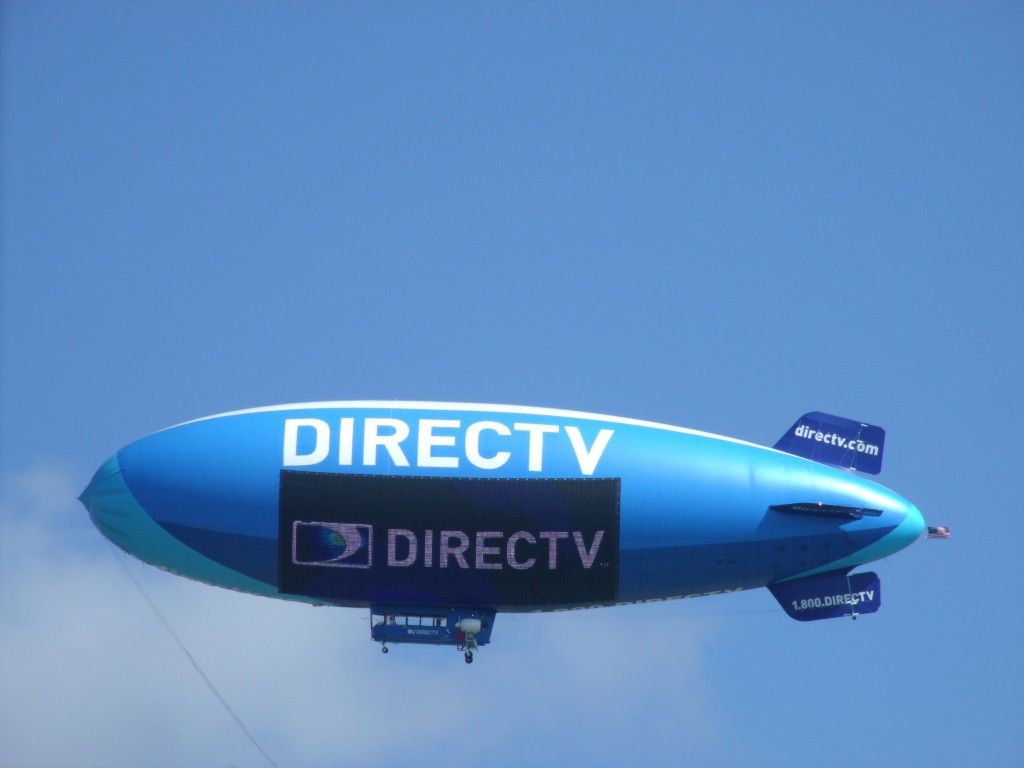 NEW YORK-, March 4, 2014 (Korea Bizwire) – Blimpologists will soon have a new, more advanced species to study as  they scan the skies this spring. The DIRECTV blimp adorned with new,  high-tech plumage – the world’s only 2,100-square-foot LED Lightsign  screen – began its annual tour March 1.

DIRECTV’s aerial ambassador remains the only airship in the world  equipped with this one-of-a-kind Lightsign technology featuring 4,200  LED boards and 235,200 LEDs. The new ship will have a GPS system and  webcam to capture footage throughout the blimp’s travels. The newly  upgraded systems will allow the DIRECTV blimp to operate with greater  daytime brightness and visibility.

“The DIRECTV blimp has been a prominent fixture at many of the nation’s  largest sporting events since 2007,” said Jon Gieselman, SVP, Marketing  and Advertising for DIRECTV. “But this new technology-rich airship will  be a far more spectacular sight in the sky and is sure to stop people in  their tracks as they look up at this amazing new sight.”

The new DIRECTV blimp will also host various children’s charities,  providing patients a temporary break from serious medical conditions and  a once-in-a-lifetime experience onboard the blimp.

“We’ve been hard at work for more than a year making this new DIRECTV  blimp the most sophisticated, eye-popping aerial media platform anyone  has ever seen,” said John Haegele, CEO, Van Wagner Airship Group. “We  believe the new airship will make a statement about DIRECTV’s  technological excellence and unparalleled TV viewing experience as it  travels to cities and major events across the U.S. throughout the year.”

DIRECTV (DTV) is one of the world’s leading providers of digital  television entertainment services, delivering a premium video experience  through state-of-the-art technology, unmatched programming and  industry-leading customer service to more than 37 million customers in  the U.S. and Latin America. In the U.S., DIRECTV offers its 20 million  customers access to more than 190 HD channels and Dolby-Digital® 5.1  theater-quality sound, access to exclusive sports programming such as  NFL SUNDAY TICKET™, Emmy-award winning technology and higher customer  satisfaction than the leading cable companies for 13 years running.  DIRECTV Latin America, through its subsidiaries and affiliated companies  in Brazil, Mexico, Argentina, Venezuela, Colombia, and other Latin  American countries, leads the pay TV category in technology, programming  and service, delivering an unrivaled digital television experience to  more than 17 million customers. DIRECTV sports and entertainment  properties include two Regional Sports Networks (Rocky Mountain and  Pittsburgh), and minority ownership interests in Root Sports Northwest  and Game Show Network. For the most up-to-date information on DIRECTV,  please visit www.directv.com.

Van Wagner Communications is a leading integrated media company with  specialized expertise in the out-of-home advertising industry – from  billboard and experiential, to aerial and in-venue sports marketing.  With operations in New York, Los Angeles, Washington, D.C., Boston,  Chicago, San Francisco, Las Vegas and Miami, sports properties in more  than 40 states and blimps on four continents, Van Wagner serves  world-class advertisers with unique advertising and branding  opportunities the United States and internationally. For more  information, visit www.vanwagneraerial.com,  Like us on Facebook  and follow @VanWagner  on Twitter.