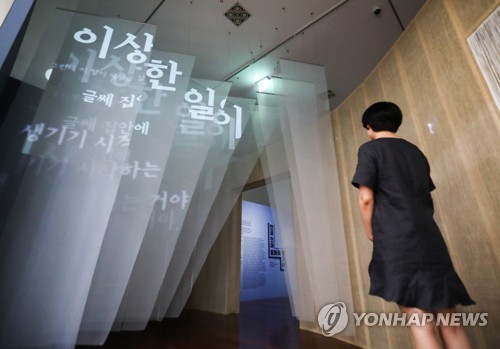 A visitor stands in front of the entrance of the new exhibition “100 Years of Korean Fairy Tales in Hangeul” at the National Hangeul Museum in Seoul on Aug.8, 2017. (image: Yonhap)

SEOUL, Aug. 8 (Korea Bizwire) – Children’s books reflect a nation’s identity and livelihood and they, in turn, play a crucial role in nurturing and consolidating the nature of the people, wrote Bang Jeong-hwan for a local magazine in 1922. Bang (1899-1931) was a children book writer and an activist who fought for children’s rights.

Keeping his belief in mind, the National Hangeul Museum opened a special exhibition Tuesday on the history of Korean children’s books in hangeul, or the Korean alphabet, in light of their influence over the people’s collective mindset and spirit.

The museum said this is the first-ever exhibition of this scale — with 207 pieces of historic books, documentation and audio books — dating back as early as the 1910s. 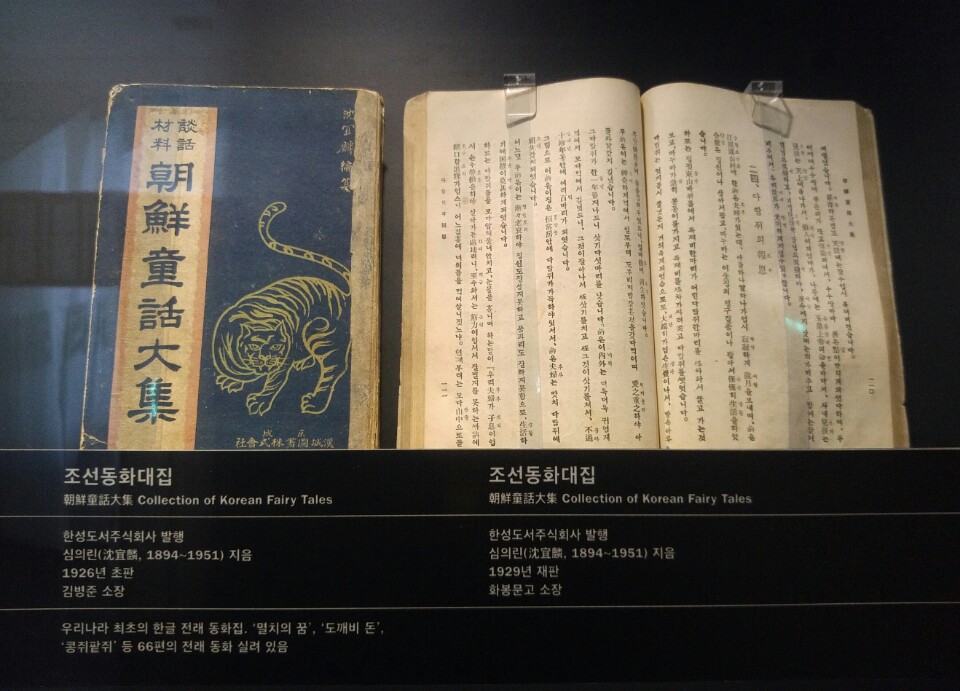 The movement to document Korean traditional fairy tales in hangeul started in earnest as Japan increasingly made shady attempts to use Korean stories to suppress the spirit of the Korean people, according to the museum.

When Japan started collecting Korean fairy tales, which had been largely passed down by word of mouth for generations, poet Choi Nam-sun (1890-1957) launched in 1913 his own campaign to gather old Korean stories. He feared that they might get lost for good amid Japan’s relentless suppression of Korean culture. Japan colonized Korea in 1910 and ruled it until 1945.

During that year, Choi published the first issue of children’s magazine “Red Jeogori.” Jeogori is a Korean traditional jacket. The magazine ran the story “Stupid Ondal” which is believed to the oldest fairy tale written in hangeul. The magazine was forced to discontinue by the Japanese after only running for five months.

In September that year, Choi launched yet another children’s magazine “Aedeul-Boi” which means things to read for children. In it, he ran an advertisement for children’s stories to be sent to the magazine, undaunted by Japan’s ruthless crackdown on Korean literature.

“During the research for the exhibition, we learned that there existed more than 1,000 fairy tales. But many have been lost,” said Kim Mi-mi, the chief curator of the exhibition.

“Even though our nation’s roots and culture are deeply embedded in them, so many of them were discarded partly because they were children’s books,” she said. “We could understand how Choi Nam-sun must have felt when he decided to document Korean fairy tales.”

On display are, among other things, Korea’s first-ever collection of 66 fairy tales compiled in 1926 by Sim Ui-rin, “Korean Fairy Tales” by William Elliot Griffis (1843-1928) and “Omjee the Wizard-Korean Folk Stories” by Homer B. Hulbert (1863-1949). There are also books on Korean fairy tales in Japanese published by the Japanese Governor-General of Korea which ran an extensive study on Korean literature to study Koreans, thereby more effectively controlling them.

The exhibit, which runs until Feb. 18, 2018, is designed to tell visitors that Korean fairy tales are not just part of children’s literature but they play an important role in transferring Korean culture to generations to come, the curator said.