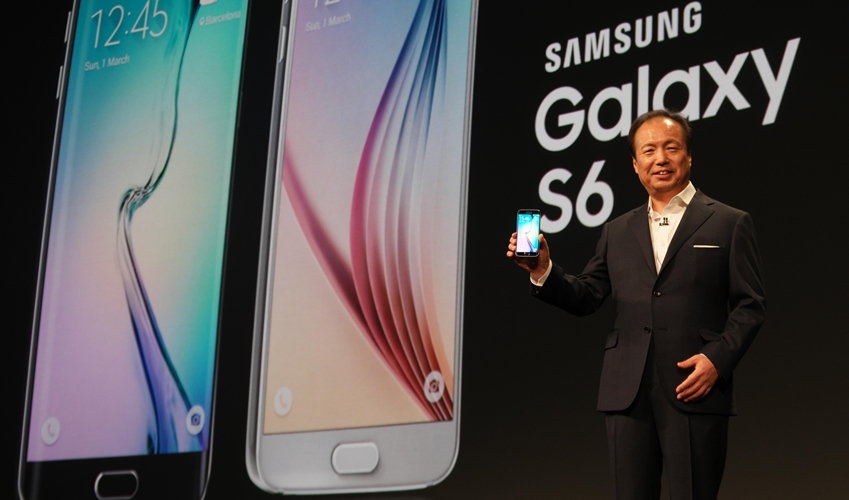 SEOUL, Mar. 2 (Korea Bizwire) — South Korea’s Samsung Electronics Co. on Sunday (Spain time) showed off its new Galaxy smartphones that have the industry’s first wireless-charging batteries and a mobile payment system with wider access, key new features that the tech firm hopes will set the handsets apart from its neck-and-neck rivals when they go on the market next month.

The Galaxy S6 comes in a metal and glass frame instead of plastic. It can be charged without cords through an electronic pad, a technological breakthrough that is anticipated to open a new chapter in the global smartphone industry.

The company also introduced the Galaxy S6 Edge, which has curved screens on both sides, an improvement from the previous version which has only one side screen.’

The smartphones were showcased at Samsung’s “Unpacked” event ahead of the Mobile World Congress that will be held in Barcelona from Monday to Thursday.

NH Investment & Securities Co. gave an estimate of 51 million units for the Galaxy S6, up from 46 million units before the showcase.

“The design of the Galaxy S6 is better than expected,” NH Securities said. “While Samsung failed to get positive responses from the market in terms of design after the Galaxy S3, (the new Galaxy) would be a breakthrough.”

While Samsung had championed its detachable batteries as an advantage over Apple Inc.’s iPhones, whose users were jokingly referred to as “wall huggers” who had to stay put near an electric outlet when recharging, the South Korean firm u-turned and opted for a built-in battery for its new model.

Samsung said there is still a difference. Given the new Galaxies’ breakthrough-level charging speed, a 10-minute charge will give the smartphones about four hours of usage, it said.

Samsung added that its smartphones are the first to win certificates from both the Wireless Power Consortium and Power Matters Alliance at the same time.

Samsung Pay, a mobile payment system, also stands out from other competitors. It supports virtually all forms of payment — Near Field Communication (NFC), Magnetic Secure Transmission (MST), and barcode technologies. This was made possible after Samsung decided to buy U.S. mobile technology firm LoopPay Inc., which has patent rights related to MST, a payments solution that works with existing magnetic stripe readers.

While Apple is already in the market with Apple Pay, Samsung said during the showcase event that its payment system will tout a wider scope of usage.’

Samsung’s South Korean office, meanwhile, declined to comment on its plan to compete against Google Inc.’s “Google Wallet,” apparently due to the sensitivity of the issue.

“(The Unpacked event) was only an announcement. We have nothing to tell you about that, as (things) will vary depending on countries,” an official said.

The birth of Samsung’s own payment system was closely watched by industry insiders as nearly all of Samsung smartphones work on Google’s Android platform, including the two newcomers.

Due to the heavy dependency on Android, some industry watchers predict that the Galaxy S6 will end up coming with two competing mobile payment platforms.

“Samsung Pay will initially be available in the United States and Korea this coming summer and expand to other regions, including Europe and China with the Samsung Galaxy S6 and Galaxy S6 Edge,” the company said.

Shin Jong-kyun, the head of Samsung’s mobile unit, lauded the new flagships as the “most beautiful” smartphones ever made by the firm.

“With the all-new Galaxy S6 and Galaxy S6 Edge, Samsung is offering what’s next in mobility, along with a new standard to drive the global mobile agenda,” Shin said.

But the design will not be everything, say other industry watchers, who worry that Samsung may end up as a mere latecomer with a built-in battery if the Galaxy S6 models fail to snatch not only the market’s attention, but the profits.

The two-sided curved screen on the Galaxy S6 Edge may also be dismissed as a “forced” upgrade from its one-sided older brother if it fails to convince users about the additional side, they say.

As such, amid the pros and cons over Samsung’s rather bold experiments, the new Galaxy models are set to be decisive factors for Samsung’s earnings, as the firm’s mobile sector has been facing setbacks in the past months.

Industry watchers say Samsung, which had been the top producer of smartphones in terms of sales volume, was recently outperformed by its main rival, Apple Inc., for the first time in more than three years in terms of quarterly sales in the October-December period of 2014.

Apple reported in its earnings report that it sold 74.5 million handsets in the October-December period. Samsung did not give an exact number but said it sold 95 million units in the cited period, of which smartphones accounted for more than 70 percent, suggesting that the two competitors roughly matched each other’s sales.’ 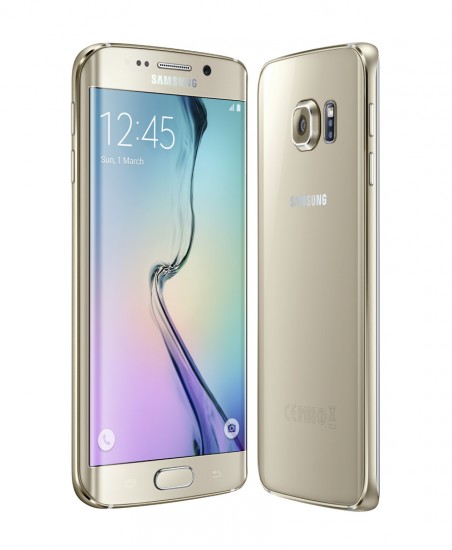 The Galaxy S6 comes with a 5.1-inch super active mode organic light-emitting diode (AMOLED) display, a size equal to its earlier model. The upgraded display will deliver a clear screen even while outdoors, Samsung said.

The two models come with a 14-nanometer-level mobile application processor (AP), the low-power double data rate 4 (LPDDR4), and the Universal Flash Storage (UFS) 2.0, an upgraded flash memory chip for smartphones with a high speed and a high capacity, which will help mobile devices run more stably.

By using its own Exynos 7420 AP, Samsung broke away from U.S.-based Qualcomm Inc.

The move was anticipated by industry watchers. It followed rumors that Qualcomm’s Snapdragon 810 overheats, but the choice was also linked to the company seeking to shed the handset-oriented business portfolio and expand its profits by focusing on the chip sector.

The main cameras come with 16 megapixels, with the front one for selfies improved to 5 megapixels from the previous 2 megapixels.

Samsung compared photos from its new smartphones, which use Auto Real-time High Dynamic Range Technology (HDR), with those from the latest iPhones under limited light.

The handsets will come in white, black, or gold, with blue and green also available for the Galaxy S6 and the Galaxy S6 Edge, respectively.