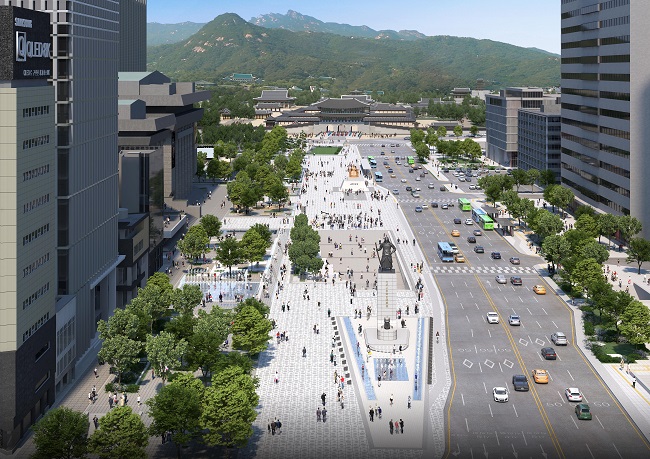 This image, provided by the Seoul city government, illustrates Gwanghwamun Square after it is redesigned.

SEOUL, Jan. 25 (Korea Bizwire) – Gwanghwamun Square in central Seoul will reopen in July after completing over 1 1/2 years of renovation that will more than double the total area, including tripling the space for trees and other plants, the city government said Tuesday.

The square, located in front of the royal Gyeongbok Palace and the U.S. Embassy, has been one of the must-visit places for tourists and citizens.

Since November 2020, construction has been under way to expand the square from 18,840 square meters to 40,300 square meters and turn part of it into a park, and add more historical and cultural attractions.

The city government first finished expanding the one-way five-lane road in front of the adjacent U.S. Embassy to a two-way road of seven to nine lanes and opened it to traffic in March.

The road on the other side of the square, in front of the Sejong Center for the Performing Arts, was turned into a new part of the square in June.

The city government had planned to finish the facelift and open the upgraded square in April but postponed the opening to July to prevent possible safety accidents that could happen due to hurried construction. The project is currently about 52 percent complete. 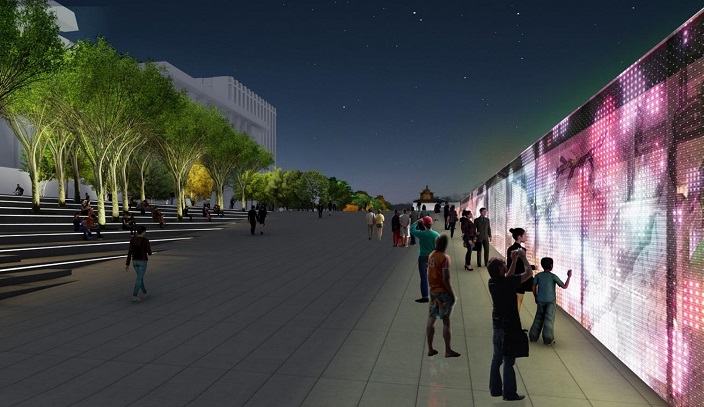 This image, provided by the Seoul city government, illustrates a media art wall that will be installed at Gwanghwamun Square after it is redesigned.

After the makeover, one-fourth of the fresh Gwanghwamun Square, or 9,367 square meters, will be a park filled with green, and waterscape facilities will be installed across the square, including a waterway displaying South Korea’s history and a fountain depicting the principles of the Korean alphabet, hangeul.

Statues of battleships and a monument of victory will be newly installed around the iconic statue of Admiral Yi Sun-sin.

Historical artifacts and some of the sites, including the government office of inspection of the Joseon Dynasty (1392-1910), discovered in the course of construction, will be exhibited, with the rest covered up with earth again for preservation.

Other works are expected to take longer.

The restoration of a Joseon-era platform that used to stand in front of Gyeongbok Palace will be completed in 2023. The platform, which was used by kings to communicate with the people, was destroyed during Japan’s 1910-45 colonial rule of Korea.

Two statues of Haechi, a mythical four-legged creature, will also be restored to their original sites by 2023, according to the city government.

“(The city government) will work hard to open Gwanghwamun Square to the public in July according to the plan and manage the place so it can give rest to visitors,” Yeo Jang-kwon, a senior city official in charge of Seoul’s balanced development, said.