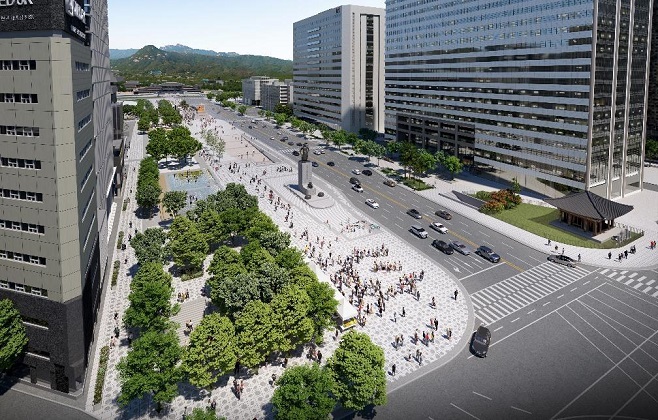 Traffic lanes will be expanded on the east of the square, located in the capital’s central Jongno Ward and adjacent to the U.S. Embassy, while a park will replace the lanes to the west, in front of the Sejong Center for the Performing Arts, the city government said in a press release.

The finalized plan was announced in September after four years of consultations with citizens, residents and relevant government agencies.

On Monday, work began on the 10.1 billion won (US$9.1 million) project to increase the number of traffic lanes to the square’s east from five to between seven and nine.

Once road construction is completed by February next year, the city government said it plans to construct the park from May through October.

“Gwanghwamun Square, the heart of Seoul, will remove its gray colors and transform itself into a green center of ecological civilization,” acting Seoul Mayor Seo Jeong-hyup said in the release.

More than 100 species of trees and flowers will be planted in the park. Excavation work will also take place on both sides of the square to preserve any cultural assets.

To minimize disruptions to traffic flow, the city government said only one lane will be blocked at a time during the construction period. 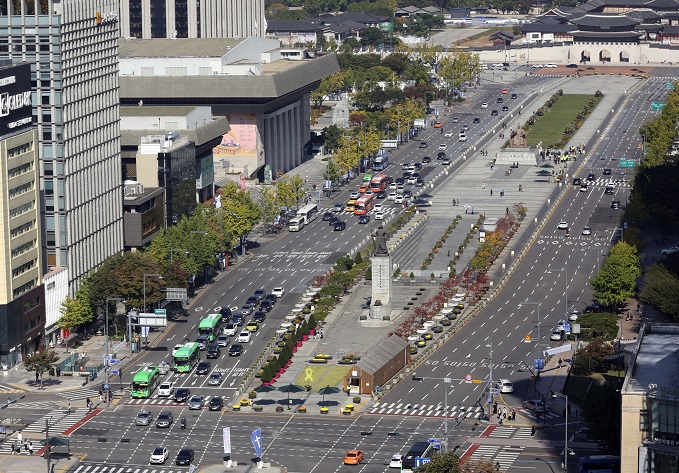 Civic groups protested that the plan was going ahead despite their objections and demanded an immediate halt.

At a press conference outside City Hall, the Citizens’ Coalition for Economic Justice and other activists accused city officials of using the project to gain public recognition without giving proper thought to traffic control measures.

“We’re not expressing unconditional opposition. We are saying they shouldn’t rush to do it now with only five months to go until the mayoral election,” Yoon Eun-ju, a leader of the coalition, said.

The project was pushed by former Mayor Park Won-soon before his suicide in July and was once scrapped in the face of opposition from civic groups and the Ministry of the Interior and Safety.

Asked to address the controversy at an online press briefing Monday, acting Mayor Seo said completing the project was the fulfillment of a “promise to citizens.”

Ryu Hun, a city official overseeing urban regeneration, added that the ultimate goal of the city government is to turn the entire Gwanghwamun Square into a pedestrian zone, including the roads to its east.