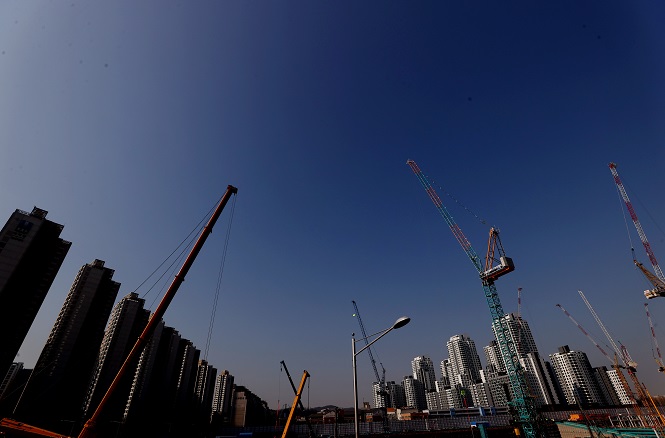 Construction permits issued for new homes came to 405,704 units in the January-October period, up 24.4 percent from a year ago, according to the data from the Ministry of Land, Infrastructure and Transport.

New construction permits in the South Korean capital of Seoul spiked 54.7 percent to 70,578 over the cited period.

New home permits issued in the capital area, which includes the western port city of Incheon and the adjacent province of Gyeonggi, swelled 18.8 percent on-year and those in the rest of the country shot up 30.6 percent.

By type, construction permits for new apartment buildings jumped 28.7 percent on-year in the 10-month period, and those for other types of housing, such as row and detached houses, expanded 12.6 percent.

Apartments are the most-favored housing choice for many South Koreans because of their comfort, convenient access to amenities and the possibility of price hikes.

Seoul — home to about one-fifth of South Korea’s population of 52 million — is dotted with apartment buildings, including high-rises.

Meanwhile, the number of groundbreakings for new homes rose 17.8 percent on-year to 451,134 units over the cited period. The number for the capital area gained 13.9 percent from a year earlier, with that for the rest of the country surging 22.1 percent.

The ministry also said home transactions in South Korea sank 18.8 percent on-year to 75,920 in October. They were also down 7.8 percent from the previous month.