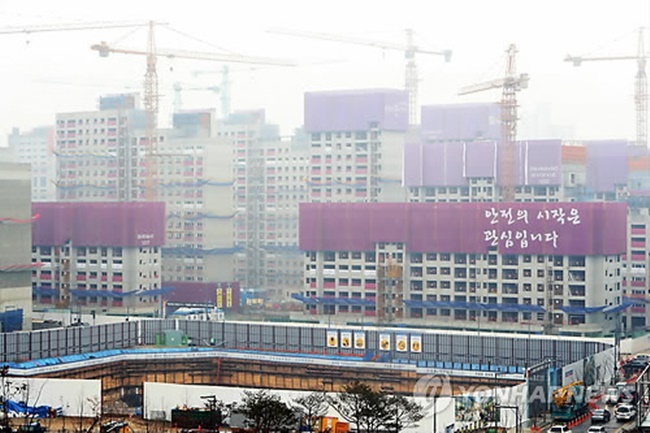 By type, construction permits for new apartments fell 38.3 percent on-year to 25,459 in April, and those for other types of housing, such as row and detached houses, edged down 1.5 percent to 18,109. (Image: Yonhap)

SEJONG, May 29 (Korea Bizwire) – New home permits in South Korea plunged nearly 30 percent in April from a year earlier, the government said Monday, amid its move to limit housing sales as a way of curing household debt and rising interest rates.

Construction permits issued for new homes came to 43,568 last month, down 27 percent from the same month a year earlier, according to the Ministry of Land, Infrastructure and Transport.

April marked the fifth consecutive month of decline. In the first four months of the year, new home permits sank 17.1 percent from a year earlier to 184,668.

New home permits had been on a steady decline since July last year, when the government announced plans to limit the supply of new apartments to rein in soaring mortgage loans, the prime culprit for snowballing household debt.

Still, household debt continued to grow, hitting a record high of 1,359.7 trillion won (US$1.21 trillion) at the end of March this year.

The capital area includes Seoul and the surrounding Gyeonggi Province, home to nearly half of the country’s 51 million population.

By type, construction permits for new apartments fell 38.3 percent on-year to 25,459 in April, and those for other types of housing, such as row and detached houses, edged down 1.5 percent to 18,109.

Amid the tumble in construction permits, the number of groundbreakings for new homes sank 49.3 percent on-year to 33,756 last month, according to the ministry.