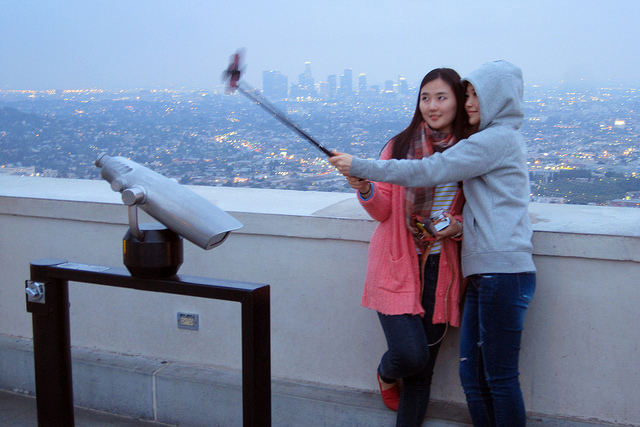 Monopod called the “Selfie stick” is spreading not only in South Korea but also across Asian countries. (image: Matt Carman/flickr)

SEOUL, Oct. 31 (Korea Bizwire) – Selfies have constantly evolved. Self-portraits taken in bathroom mirrors or selfie-shots nobody knows where you took is no longer the coolest trend. Now the brand-new hot stick emerges as a new vogue in selfies.

Monopod called the “Selfie stick” is spreading not only in South Korea but also across Asian countries. From a CEO of a Korean conglomerate to popular actors, almost all the Korean people who like to snap selfies use selfie sticks. The pole which can stretches up to 1 meter is a monopod to help people take themselves a good picture. There is a plastic handle at one end and a smartphone should be clipped at the other.

It is no longer strange for us to witness people to take selfies using selfie sticks. Foreigners who visit Korea, however, think it is quite unusual and unique. According to a survey conducted by travel agency Cosmojin asking 466 foreign tourists visiting Korea, the most unique thing they witnessed in Korea was a selfie stick. Of the respondents, 224, or about 24 percent, thought the selfie stick fad is weird and fun.

One of the respondents Jessie, a 29-year-old woman from Australia, said, “At first, I found it weird to see people cluster together smiling at something at the end of a stick that one of them hold out in front of them. But now I bought one for myself and then I realized it is very convenient to take selfies.”

It might take foreigners a while to realize what’s going on in front of them when they see people using the monopod. But soon they also join the fever, and even some tourists buy the sticks for their family or friends. Selfie sticks become a voguish souvenir in South Korea.

In accordance with the fever, Neopixkorea, a company making gadget accessories who leads the fad, plans to launch an upgraded version of the pole. The existing one has a problem of keeping balance when a smartphone is not centered. The follow-up model makes up for the weak point to allow people to use it more easily.