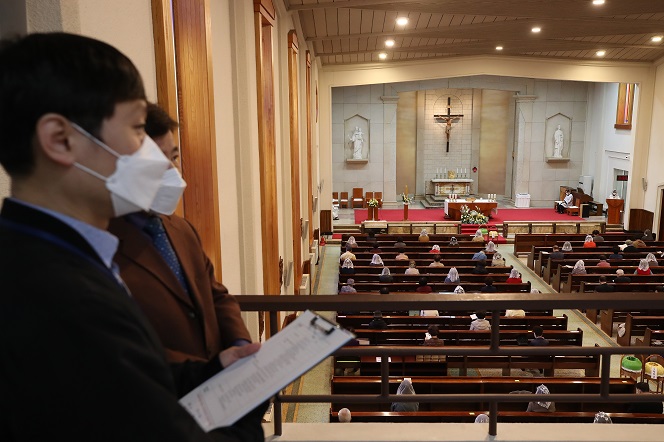 Seoul government officials check quarantine situations at a Catholic church in western Seoul on April 4, 2021, as worshipers participate in Easter Mass amid the pandemic. (Yonhap)

SEOUL, April 4 (Korea Bizwire) — South Korea’s daily new coronavirus cases stayed above 500 for the fifth straight day on Sunday, raising concerns over another wave of infections as more people go out in the warmer weather.

The country added four more deaths from COVID-19, increasing the total to 1,744. The fatality rate was 1.66 percent, the health agency said.

As of 9 p.m., health authorities and local governments reported 415 more cases across the country, 68 fewer than at the same time on Saturday. Daily new cases are counted until midnight and then announced the following morning.

With the pandemic showing no signs of slowing down, the KDCA said it is considering a ban on gatherings in business entities that have violated quaratine measures and reported a series of infections.

The health agency said it also is considering restrictions on their business operations to stem the spread of the pandemic.

Health Minister Kwon Deok-cheol said the country is at a critical point of the pandemic’s fourth wave, citing karaoke rooms, gymnasiums, door-to-door sales businesses and churches as highly facilities that can spread the virus.

A third wave of infections here, which began in mid-November last year, has shown little sign of slowing down, with the daily cases having recently stayed in the 300-400s for more than a month after peaking at a record high of 1,241 on Dec. 25.

Health authorities warned of another wave as cluster infections at various facilities, including saunas, hospitals and workplaces, continued. The movement of people has also risen amid warm spring weather.

The KDCA called for people to strictly abide by distancing rules over the Easter weekend and during this week’s by-elections in Seoul and the second-biggest city of Busan.

The health agency said it may have to consider stronger anti-virus measures if daily new cases do not slow down this week.

“We are in a perilous situation where we cannot let down our guard against the virus at any moment,” Prime Minister Chung Sye-kyun said at a meeting on COVID-19 responses.

The agency said it will decide this week whether to extend the current distancing rules or adopt stricter measures for the two weeks from April 12.

To contain further spread of the virus, the Level 2 social distancing rules have been extended in the greater Seoul area, home to half of the country’s 51.7 million population, for another two weeks until April 11.

The rest of the country will be put under Level 1.5 for the same period.

Under Level 2, gatherings of five or more people are banned, while restaurants and other public facilities are allowed to remain open till 10 p.m. 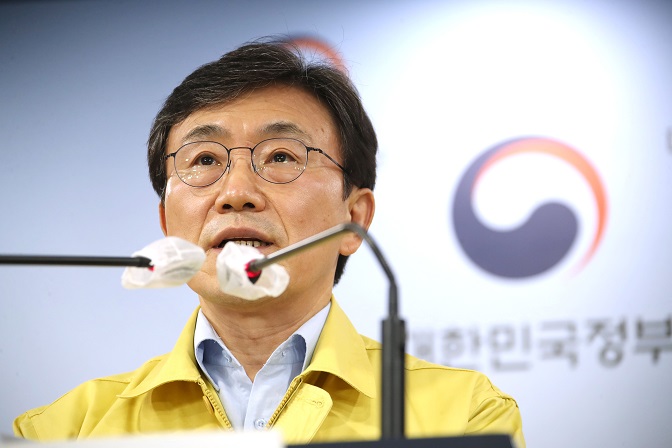 This photo taken on April 4, 2021 shows Health Minister Kwon Deok-cheol briefing on the government’s consideration of a ban on facilities which might spark further COVID-19 infections at the government complex building in Seoul. (Yonhap)

Since the country started its vaccination program on Feb. 26, a total of 962,083 people have been given COVID-19 vaccine shots, including 27,298 the previous day. The KDCA said 1.85 percent of the population has received a first shot.

A total of 11,018 cases of side effects after vaccinations have been reported, but 98.6 percent were mild symptoms including muscle pain and fever.

A total of 32 deaths after vaccinations have been reported, according to the KDCA.

Cases tied to a distribution center in Incheon, west of Seoul, reached 30, up six from the previous day.

A religious facility in Goyang, north of Seoul, reported 21 cases, up 20 from a day earlier. Infections traced to a bar in Busan added 33 to 233.

The number of patients with serious symptoms across the country reached 99, down from 101 the previous day, the KDCA said.

The total number of people released from quarantine after making full recoveries moved up 393 to 96,589.

The pandemic, which started in China in late 2019, had killed more than 2.8 million people worldwide and infected more than 130 million as of April 3, data from Johns Hopkins University showed.