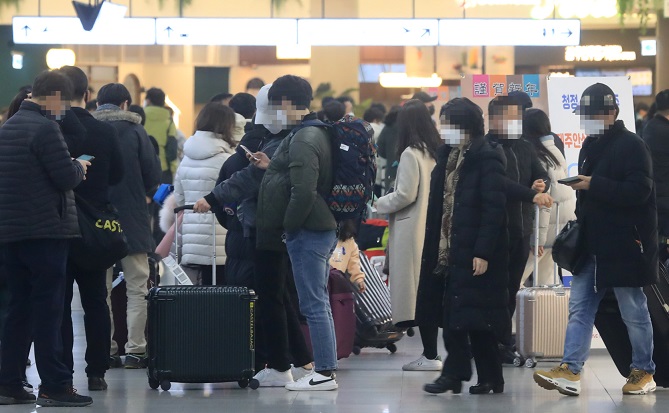 The arrival floor of Jeju International Airport is crowded with travelers on Feb. 11, 2021. (Yonhap)

The country added 504 more COVID-19 cases in the past 24 hours, including 467 local infections, raising the total caseload to 82,434, the Korea Disease Control and Prevention Agency (KDCA) said.

It marks the biggest daily tally since Jan. 27 when the figure was 559.

The Thursday tally also marks a jump from 444 cases registered on Wednesday, 303 cases on Tuesday as well as Monday’s 289 cases, which was the lowest daily tally since Nov. 23 last year.

As of 9 p.m. Thursday, the country added 379 more cases, down 67 from the same time Wednesday, according to health authorities and local governments. New cases are counted until midnight each day and announced the next morning.

Faced with a flare-up in virus cases, the KDCA on Jan. 31 extended Level 2.5 social distancing rules, the second highest in a five-tier scheme, in the greater Seoul area and Level 2 measures in other regions until Feb. 14.

Since late last month, the daily caseload has been moving in the 300-400 range due to continuing cluster infections from unauthorized religious education facilities in the central and southwestern regions.

Daily infections have been slowing down since the third wave of the pandemic peaked at an all-time high of 1,241 daily cases on Dec. 25.

But health authorities remain on heightened alert as the Lunar New Year holiday kicked off Thursday for a four-day run through Sunday.

Many Koreans travel across the country to visit their families and relatives during the traditional holiday.

To fend off a potential flare-up during the holiday when travel and gatherings increase, authorities have kept in place tight social distancing requirements throughout the holiday, including a nationwide ban on gatherings of five or more people.

Authorities plan to announce whether they will lower the current virus curbs, the second-highest in the five-tier scheme, over the weekend, after gauging the trajectory of the pandemic during the holiday.

Health Minister Kwon Deok-cheol stressed South Korea is at a “critical juncture” in COVID-19 containment as nagging infection clusters, particularly in the capital area, are threatening to reverse the downward virus curve.

“The daily tally that has been on a steady downturn since peaking on Dec. 25 (resurged to) surpass 500 after more than 400 cases were reported a day earlier. Clusters of infections have been ceaselessly continuing at churches, nursing homes, firms, saunas and restaurants,” the minister said.

“It is feared that infections may grow further during the Lunar New Year holiday,” he said, calling for extra caution to prevent virus proliferation.

A religious foundation known as Seungri and its affiliated education institution in Bucheon, west of Seoul, reported 48 more confirmed cases to a total of 101, according to health authorities.

A private network of acquaintances in Seoul’s Yongsan Ward, based on churches and social gatherings, reported a cluster of 46 new cases confirmed among them, bringing its caseload to 47. 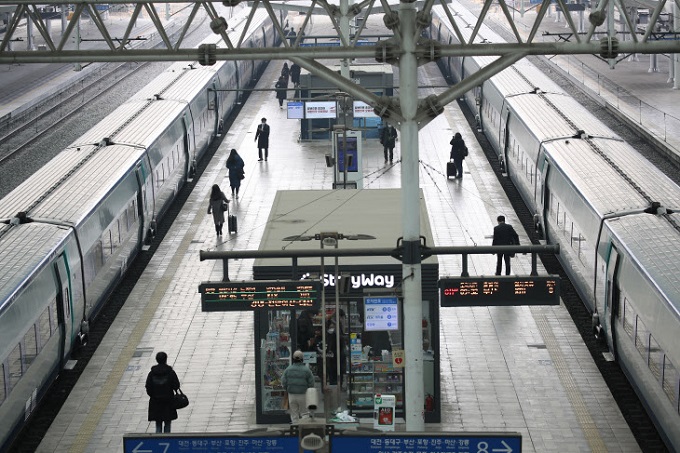 A platform at Seoul Station is relatively quiet on Feb. 11, 2021, the first day of the extended Lunar New Year holiday. (Yonhap)

Of the newly identified local infections, 177 cases were reported in Seoul and 181 cases in the surrounding Gyeonggi Province. Incheon, 40 kilometers west of Seoul, reported 25 more cases.

The three regions, representing around half of the nation’s population, alone were responsible for 82 percent of the total infections reported Thursday.

Outside the capital area, the biggest port city of Busan along the southern coast added 29 more cases.

Of the 37 imported cases, 14 were from the United States, seven from Indonesia and four from Hungary, according to KDCA.

The number of seriously or critically ill COVID-19 patients reached 170, down 14 from a day earlier.

The total number of people released from quarantine after making full recoveries was up 412 from the previous day to reach 72,638.

Separately, the country’s COVID-19 response headquarters announced that its recent evaluation found that the locally developed COVID-19 treatment, CT-P59 by Celltrion, has an effect in treating the six existing types of COVID-19 and the more contagious form of the virus from Britain but has little effect on the variant from South Africa.

The evaluation result also found the imported treatment Remdesivir to be effective in treating all types of COVID-19 including the South African variant, it said.

KDCA also announced that its vaccination experts’ committee will hold a meeting later in the day to discuss the use of the AstraZeneca vaccine.

A day earlier, KDCA approved the use of the AstraZeneca vaccine for people aged 65 or higher, but skepticism still remains here as to whether it is safe for the aged to receive the vaccine.

Based on the result of the meeting, KDCA will fix its vaccination plan for February and March and announce the details of the plan next Tuesday, it said.

South Korea is set to start vaccinating its population against COVID-19 on Feb. 26.

Meanwhile, South Korea has extended the ban on passenger flights arriving from Britain, which has been in place since Dec. 23, until Feb. 11 to block the new virus variant that was first identified in Britain.

The pandemic, which started in China in late 2019, has killed nearly 2.4 million people worldwide and infected more than 107 million as of Feb. 1, 2021, according to a tally from Johns Hopkins University.