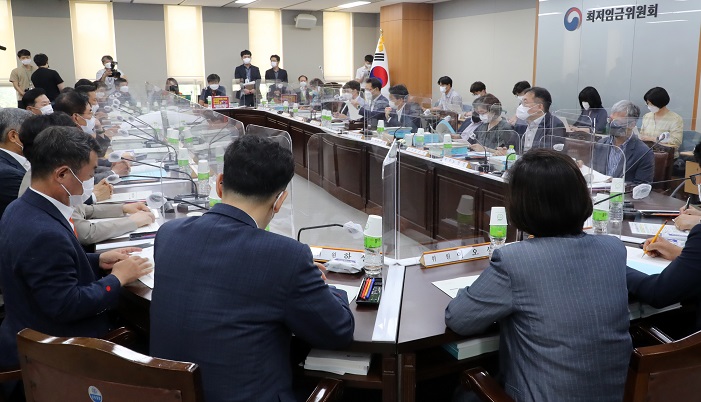 The Minimum Wage Commission holds its ninth plenary session this year at the government complex in Sejong on July 12, 2021. (Yonhap)

SEOUL, July 13 (Korea Bizwire) — The Moon Jae-in administration is set to end its term having failed to deliver on its promise to raise the minimum hourly wage to 10,000 won (US$8.74) due to strong pushback from businesses and the unprecedented challenges posed by the COVID-19 pandemic.

The Minimum Wage Commission, a tripartite panel composed of nine members each from labor, business and the general public, decided in a 13-0 vote Monday to set next year’s minimum wage at 9,160 won, a 5.1 percent increase from this year’s 8,720 won.

It was the last time minimum wage negotiations were held under the Moon administration because the president, who is constitutionally limited to a single five-year term, will step down in May before the next round of negotiations gets seriously under way.

Moon has previously apologized for failing to raise the minimum wage to 10,000 won by 2020 as promised at the start of his administration. He later apologized again when it became clear the promise would not be kept before the end of his term.

On Tuesday, Prime Minister Kim Boo-kyum pleaded with both the labor and business circles to accept the new minimum wage “with a broad perspective.”

“I understand that both sides are frustrated but we are currently in a very difficult crisis due to COVID-19,” he said during a Cabinet meeting.

“We do not have the time and spare energy to engage in a dispute. Even if we are dissatisfied, we need to demonstrate the virtue of each side taking one step back for the sake of coexistence and mutual benefit.” 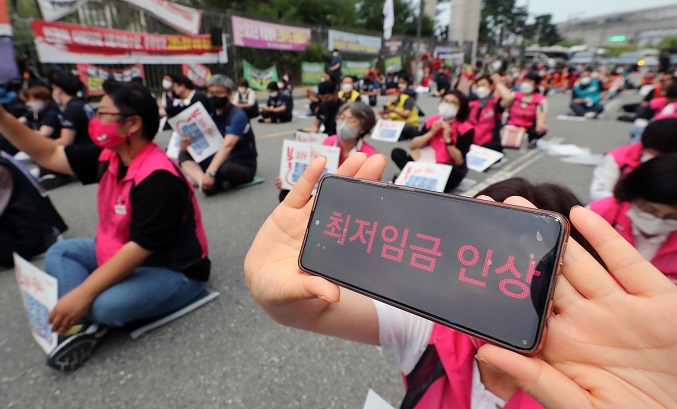 Members of the Korean Confederation of Trade Unions hold a rally outside the government complex in Sejong on July 12, 2021, to demand an increase in the minimum wage. (Yonhap)

The Moon administration took office in 2017, when the minimum wage was 6,470 won.

Over five years, the minimum wage has increased at an average rate of 7.2 percent, which is less than the 7.4 percent under the previous administration of President Park Geun-hye.

The corresponding rate during the Lee Myung-bak administration, which preceded Park’s, was 5.2 percent.

The Moon government’s push to hike the minimum wage faced resistance early on.

After the minimum wage was raised by 16.4 percent in 2018, the pace of increase in the number of employed people began to slow, leading critics to blame the significant wage hike.

Experts were divided on the impact of a higher minimum wage on hiring, but the Moon administration, under pressure from critics, expanded the scope of bonuses and fringe benefits that count toward a worker’s minimum wage.

In effect, employers could meet the higher minimum wage requirement without actually paying their workers more. 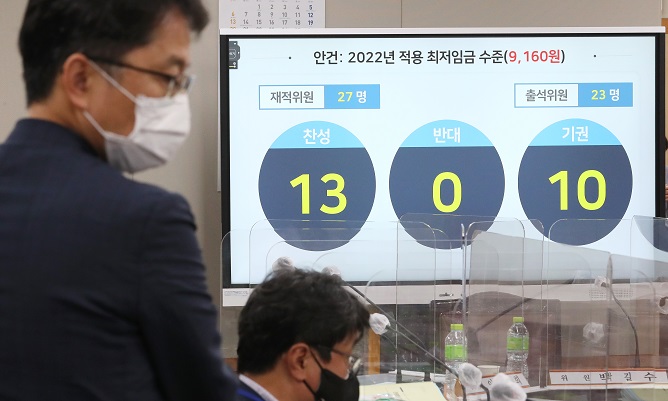 A screen shows the results of a vote on next year’s minimum wage during the ninth plenary session of the Minimum Wage Commission at the government complex in Sejong on July 12, 2021. (Yonhap)

This year’s small increase was also attributable to the pandemic as the overall focus shifted to keeping jobs even if it meant low wages.

And while the 5.1 percent increase next year has already invited condemnation from business circles that insist the pandemic and various restrictions have crippled small business owners, it is still a far cry from the 23.9 percent increase initially demanded by labor circles.

Workers have claimed the pandemic has eroded their real income by increasing income inequality and pushing up prices.

They also point to the structural problems the government failed to address, saying their demands for a higher minimum wage may not have faced such strong resistance from employers had the government taken steps to lower rent and franchising fees for small business owners and merchants and tackled conglomerates’ systemic abuse of smaller firms.

Park Joon-shik, a Hallym University professor who serves as chairman of the Minimum Wage Commission, admitted that the government’s first two minimum wage hikes were “more ambitious than reality would allow.”

“In the process of moderating (the increase in minimum wage), we were hit by the pandemic,” he told reporters after Monday’s plenary session. “Because of these factors, the minimum wage fell short of the people’s desires these past two years.”

The 5.1 percent increase was proposed by the public interest commissioners based on the economic forecasts of the finance ministry, the Bank of Korea and the Korea Development Institute.

The three institutions on average forecast economic growth of 4 percent and inflation of 1.8 percent next year, which add up to 5.8 percent.

From there, the commissioners subtracted 0.7 percent, the estimated increase in the number of employed people.

The commission said it expects between 768,000 and 3.55 million workers to benefit from next year’s minimum wage increase, or 4.7 to 17.4 percent of all workers.