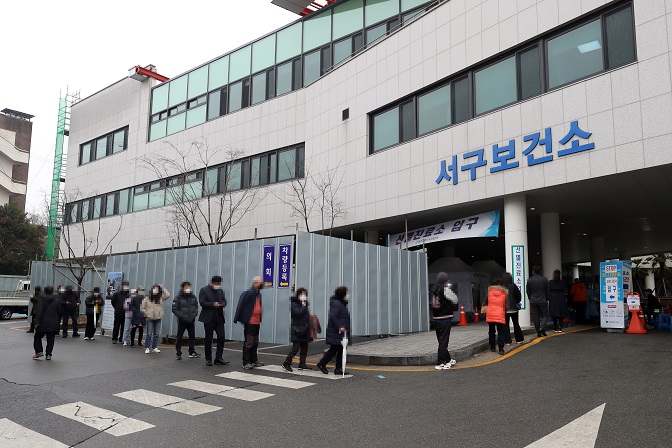 People wait to have a coronavirus test at a clinic in Gwangju, 330 kilometers southwest of Seoul, on Feb. 1, 2021. (Yonhap)

The country added 336 more COVID-19 cases, including 295 local infections, raising the total caseload to 78,844, according to the Korea Disease Control and Prevention Agency (KDCA).

The daily caseload stood at 305 cases on Monday and 355 on Sunday, when the tally fell back to the 300s for the first time in five days.

Health authorities said they could loosen social distancing measures ahead of the Lunar New Year holiday that falls on Feb. 11-13 if the number of infections significantly slows down.

As of 9 p.m. Tuesday, the country added 399 more cases, up 102 from the same time Monday, according to the health authorities and local governments. New cases are counted until midnight each day and announced the next morning.

Another cluster infection appeared to have emerged Tuesday at the Nambu Correctional Institution in southwestern Seoul, with nine inmates who worked in the kitchen testing positive.

Cases tied to IM education facilities came to 385 as of noon, up one from the previous day.

Infections traced to a general hospital in eastern Seoul rose five over the past 24 hours to 52.

Amid a flare-up in virus cases, health authorities on Sunday extended Level 2.5 social distancing rules, the second highest in its five-tier scheme, in the greater Seoul area and Level 2 measures in other regions for another two weeks until Feb. 14.

Under the extended rules, gatherings of five or more people are also banned almost across the entire country.

The move, aimed at helping the country smoothly begin COVID-19 vaccinations next month and start the school spring semester in March, however, has drawn fierce protest from small merchants hit hard by prolonged restrictions from state and local virus measures. 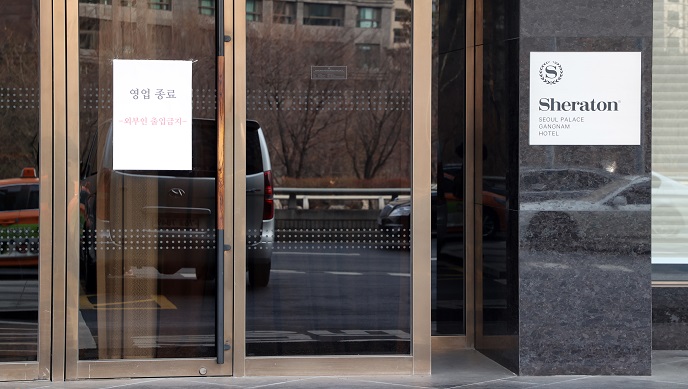 This photo, taken Feb. 1, 2021, shows Sheraton Seoul Palace Gangnam Hotel in southern Seoul, with a notice on the entrance that reads it is closed amid the COVID-19 pandemic. (Yonhap)

Since the third wave of the pandemic peaked at a record high of 1,241 on Dec. 25, new virus infections have been slowing down.

But authorities believe relaxing the curbs runs the risk of an uptick as cluster infections have continued to pop up at religious facilities, hospitals and other risk-prone establishments.

The country added 41 imported cases, increasing the total to 6,369. Seventeen cases came from Asian countries excluding China, followed by 14 from the United States, seven from Europe and three from Africa.

The number of seriously or critically ill COVID-19 patients reached 224, down from 225 a day earlier.

The total number of people released from quarantine after making full recoveries stood at 68,775, up 466 from the previous day.

Meanwhile, South Korea has extended the ban on passenger flights arriving from Britain until Feb. 11, which has been in place since Dec. 23, to block the new virus variant that was first identified in Britain.

The pandemic, which started in China in late 2019, has killed more than 2.2 million people worldwide and infected more than 103 million as of Feb. 1, 2021, according to a tally from Johns Hopkins University.