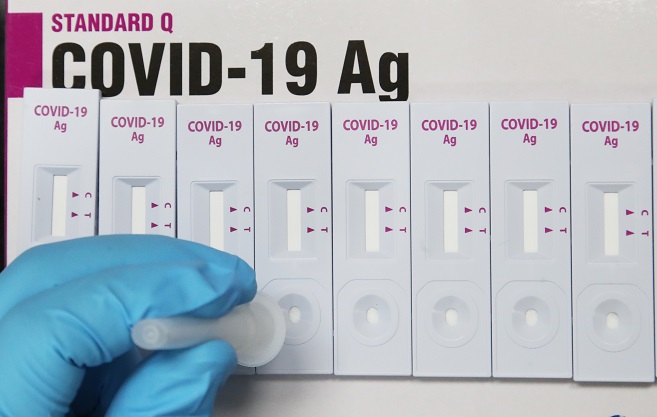 A researcher shows rapid antigen detection test kits for the new coronavirus in SD Biosensor Inc., a global diagnostic company in Suwon, south of Seoul, on Dec. 9, 2020. Health authorities plan to first provide the test kits to facilities that include nursing homes and social welfare facilities, which are vulnerable to the virus. (Yonhap)

The country reported 686 new virus cases, including 662 domestically transmitted ones, raising the total caseload to 39,432, according to the Korea Disease Control and Prevention Agency (KDCA).

Of the 686 new virus cases, 524 were reported in the greater Seoul area, covering Gyeonggi Province and Incheon, just west of Seoul.

The figure showed a sharp rise from 594 the previous day and 580 on Monday, hitting the second-highest mark since January when the first case was reported.

The country is expected to report more than 600 additional cases on Thursday as health authorities confirmed 481 new cases Wednesday as of 6:00 p.m., with 374 cases from the greater Seoul area.

The country announces its official tally of the previous day at 9:30 a.m.

The social distancing Level 2.5, the second-highest level under the five-tier scheme, went into effect Tuesday in the greater Seoul area, covering Gyeonggi Province and Incheon, west of Seoul.

In other areas, the third-highest level of 2 was applied.

Under the boosted guidelines to be effective till Dec. 28, a slew of measures have been taken to prevent people from gathering and traveling across the country.

Health officials said skyrocketing community infections were the main cause of the surge in new virus cases in the greater Seoul area.

The ratio of untraceable cases to the total confirmed cases reported from Nov. 26 to Wednesday stood at 19 percent, down from 20.7 percent the previous day.

They have also warned of the wider pandemic, forecasting that the daily infections may approach 1,000 next week unless the current spread of the new virus is brought under control.

The officials have been worried about a possible shortage of hospital beds to treat COVID-19 patients.

Central Disease Control Headquarters came up with another guideline to expand the number of people being tested for the virus.

Under the new guideline, anyone can take a virus test free of charge at screening centers under Level 2 or higher, or if a separate notice is issued, regardless of whether they have any symptoms of coronavirus. 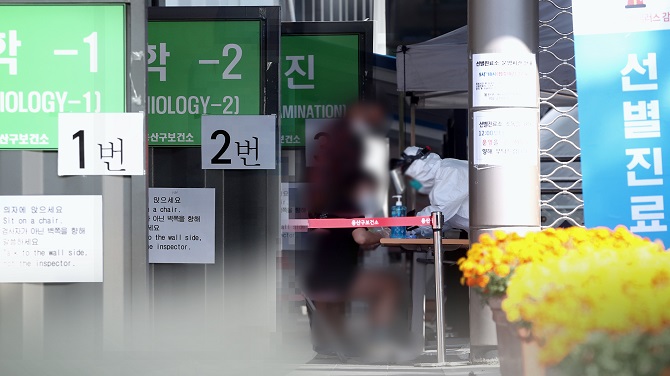 This image provided by Yonhap News TV on Dec. 9, 2020, shows a screening center set up in central Seoul.

Health authorities said they will take new measures as part of preemptive efforts to put the surge in virus cases under control.

The authorities have decided to carry out aggressive and preemptive tests of young and middle-aged people for the virus as they could be a main cause of the current wave of the infections due to their brisk activities.

Health authorities will increase the number of residential treatment centers and clinics specialized in treating COVID-19 patients to brace for a possible shortage of hospital beds.

Guidelines for the use of winter sports facilities such as ski resorts and ice rinks were featured in the new measures.

Indoor winter sports facilities like ice rinks are required to limit the number of users to one person per 4 square meters under Level 1 and close after 9 p.m. under Level 2. Starting at Level 2.5, the facilities must shut down.

Under Level 1, people can visit outdoor sports facilities like ski resorts complying with basic guidelines, including wearing masks and identification.

The facilities must limit the number of persons to be admitted to one third of their capacity under Level 2 and close after 9 p.m. under Level 2.5, as well as closed down for 24 hours under Level 3.

A public advertisement starring well-known female golfer Pak Se-ri will be released from Wednesday to ask people to abide by the social distancing measures.

Of the 686 new virus cases announced early in the day, 264 confirmed cases were reported in Seoul and 214 from the surrounding Gyeonggi Province. Incheon, west of Seoul, added 46 more cases.

The greater Seoul area is home to about half of the country’s 51.6 million population.

The number of imported cases reached 24, down from 28 the previous day. They include 11 from the United States and six from Europe.

The number of COVID-19 patients with serious symptoms across the country amounted to 149, up from 134 on Tuesday.

The total number of people released from quarantine after making full recoveries came to 30,177, up 527 from Tuesday.