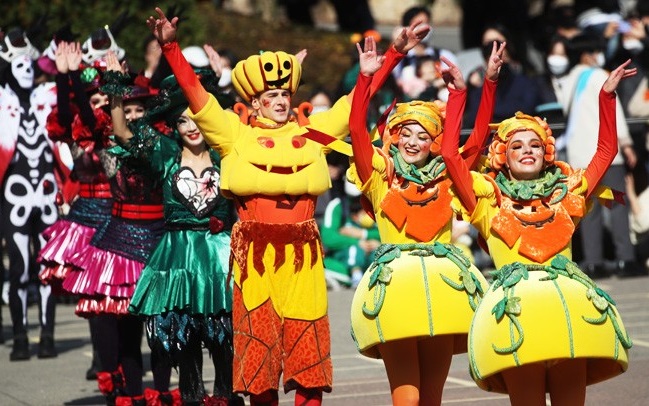 Performers take part in the annual Halloween Wicked Parade at the Everland amusement park in Yongin, south of Seoul, on Oct. 29, 2021. (Yonhap)

SEOUL, Oct. 29 (Korea Bizwire) – South Korea’s new coronavirus cases stayed above 2,100 for the second consecutive day Friday, as worries persist over a virus resurgence with the country set to relax antivirus measures for a return to normalcy.

The daily tally surpassed the 2,000 mark after 20 days on Thursday. The daily infection tally has moved in the quadruple digits since July 7, including the record high of 3,272 cases on Sept. 25.

As of 9 p.m. Friday, South Korea had reported 1,834 new cases. This is down 96 from the same time the previous day, with the country likely to report around 2,100 cases Saturday.

The recent spike in infections has spawned worries as the country is poised to relax the social distancing rules starting Nov. 1 in efforts to restore daily life back to the pre-pandemic days, buoyed by a rising vaccination rate.

Hours earlier, the government announced the first phase of the “living with COVID-19″ scheme to be imposed for the next four weeks as part of a broader plan to gradually lift the virus restrictions by the end of January.

Under the new measures, starting next week, people will be allowed to gather in groups of up to 10 in the greater Seoul area and up to 12 in non-metropolitan regions, regardless of vaccination. Basic preventive measures like wearing masks indoors will stay in effect.

Restaurants and cafes, though, can have up to four customers if they are unvaccinated.

Operation hour curfews for businesses will be fully lifted, except for night entertainment facilities. 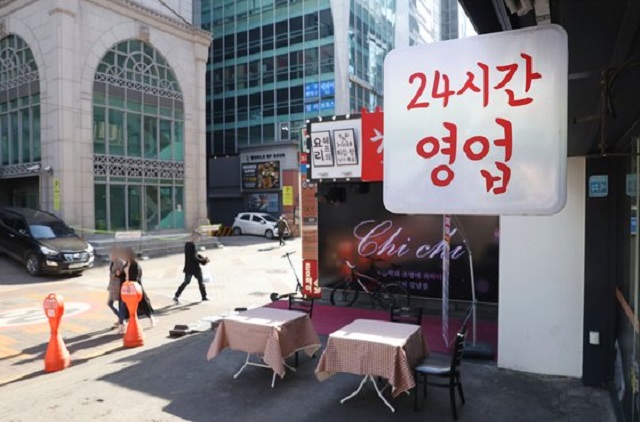 A sign advertising 24-hour operations is displayed at a restaurant in Seoul on Oct. 29, 2021. (Yonhap)

The “vaccine pass” system, which requires visitors to have a vaccination certificate or negative test result, will be introduced for high-risk facilties, including bars, nightclubs and indoor gyms, with a grace period of one or two weeks.

Despite the planned easing of virus curbs, health officials have called for vigilance, given that increasing movements and activities, coupled with the Halloween season and the chilly weather, may help spur the virus surge.

About 41.03 million people, or 79.9 percent of the country’s 52-million population, had received their first COVID-19 vaccine shots as of Thursday. The number of fully vaccinated people came to 37.59 million, or 73.2 percent.

Of the locally transmitted cases reported Thursday, Seoul had 770 cases, with the surrounding Gyeonggi Province logging 762 cases and Incheon, west of Seoul, 132 cases.

Thirty cases came from overseas, putting the cumulative total at 15,070.

The total number of people released from quarantine after making full recoveries came to 332,995, up by 2,142 from a day earlier, the KDCA said.