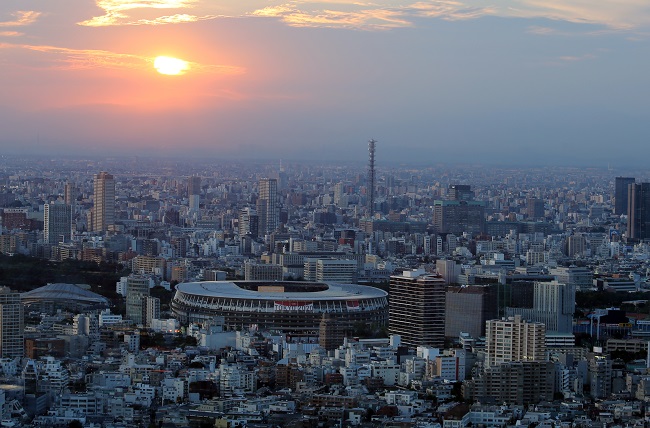 This photo from July 21, 2021, shows the National Stadium in Tokyo, site of the opening ceremony for the Tokyo Olympics. (Yonhap)

SEOUL, July 23 (Korea Bizwire) — The level of interest in the Tokyo Summer Games is sharply lower in South Korea compared to past events, a survey showed Friday.

According to a survey of 1,003 people aged 18 and older conducted by Gallup Korea from Tuesday to Thursday, only 32 percent of respondents said they are very or a little interested in the Summer Olympics that was to kick off in Tokyo on Friday.

A majority, or 66 percent, said they are not interested in one of the biggest sports events in the world. The remaining 2 percent declined to answer.

The level of interest in the Tokyo Olympics more than halved from 71 percent tallied ahead of the PyeongChang Olympics held in South Korea in the winter of 2018.

The previous Summer Olympics, held in Rio de Janeiro, Brazil, in 2016 gained the interest of 60 percent of Koreans.

The poll found that 84 percent of the respondents are pessimistic about the possibility of the Summer Games being finished successfully, apparently reflecting many obstacles Tokyo is facing in holding the events amid the worldwide COVID-19 pandemic.

Only 7 percent expected the event to go well. 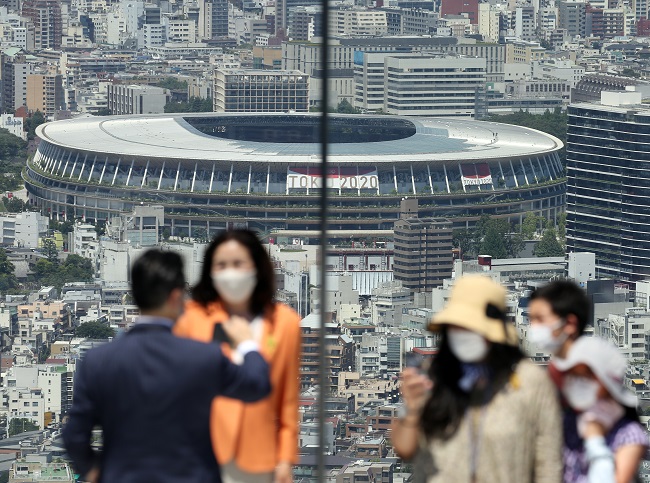 Visitors at an observation tower in Tokyo take pictures with the National Stadium, site of the opening ceremony for the Tokyo Olympics, in the background on July 21, 2021. (Yonhap)

The survey also showed the types of Olympic sports favored by Koreans.

Football, one of the most popular sports in the country, ranked first, cited by 40 percent of respondents. The men’s football team is aiming for its second Olympic medal following a bronze in the 2012 London Olympics.

Baseball came in next at 20 percent, followed by archery at 16 percent and volleyball at 7 percent.

South Korea was the baseball champion of the 2008 Beijing Olympics, the last summer games before the sport was removed from the Olympic program for over a decade.

The popularity of archery seems to be attributable to the country’s long dominance in the sport and that of volleyball to superstar Kim Yeon-koung’s last Olympic quest.

Some of the other sports in the top 10 included track and field, swimming, taekwondo and shooting.

The survey has a margin of error of plus or minus 3.1 percentage points at a 95 percent confidence level.