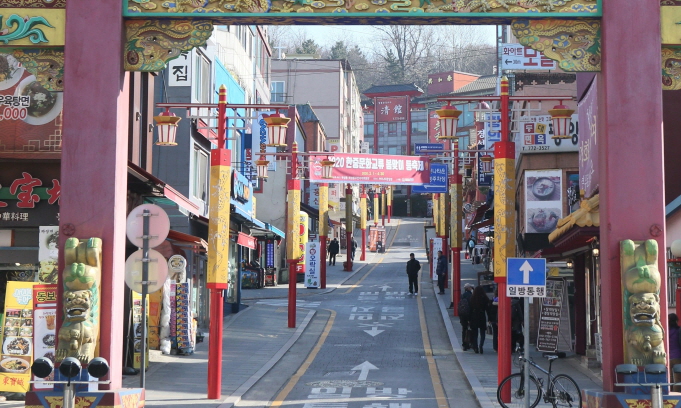 A street in Chinatown in the southeastern South Korean port city of Busan remains vacant on Feb. 5, 2020, amid fears of the new coronavirus that originated in China. (Yonhap)

A petition was posted at an online petition site run by the presidential office last month calling upon the government to stop the Chinatown construction in Gangwon Province.

The petition has gained almost 500,000 signatures, attracting media attention and surpassing the 200,000 signature threshold for an official government response.

The petitioner said he could not accept the plans to build ‘small China’ in South Korea, when China is constantly belittling South Korean culture.

The construction project, led by Kolon Global Corp. and others since 2018, aims to build a Chinese Cultural Complex across 1.2 million square-meters of land in the Chuncheon and Hongcheon region.

Concerned by the recent rise of anti-Chinese sentiment, the construction companies held a shareholder’s meeting last month and changed the project name to ‘Korea-China Cultural Town’.

Some experts are concerned, however, that another round of ‘cultural infringement’ will take place in the project, led by massive inflow of capital.

“Like other Chinatowns in the world that became famous landmarks in each country, we aim to create a platform for a lively experience of the Chinese culture and promote tourism in South Korea,” Gangwon Provincial Office said during the launch ceremony in 2019.

In an interview with the People’s Daily Online, an online Chinese state media, Gangwon Gov. Choi Moon-soon said the project was a ‘One Belt, One Road’ of culture, a term used to refer to Chinese-led New Silk Road Policy, for which he was heavily criticized by the public.

With Chinatown already in place in Incheon, west of Seoul, many question the need to build another one in Gangwon Province.

Other experts, however, are wary about potential ‘backfires’ that may occur if extreme obsession with anti-Chinese sentiment ends up with boycott movements against China and all that is ‘Chinese’.

“Stopping two-track exchanges will only end up in severed diplomatic relations,” culture critic Jeong Deok-hyun said. “It is preferable that all processes of addressing China’s false claims and other infringing acts are done within the scope of culture.”