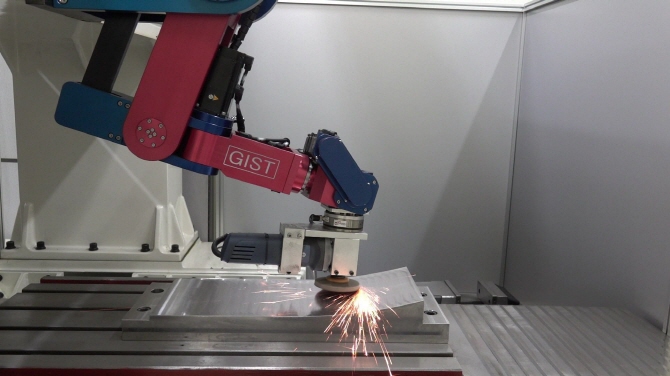 The final process of molding a vehicle, which determines the exterior design of a car, requires manual work by skilled workers. (image: Gwangju Institute of Science and Technology)

A research team from the Gwangju Institute of Science and Technology (GIST) said Wednesday that it has succeeded in increasing the joint rigidity of robots with a special design.

In addition, researchers were able to obtain satisfactory surface conditions by stably machining the device with only small forces.

The final process of molding a vehicle, which determines the exterior design of a car, requires manual work by skilled workers.

It is also a time consuming and costly process even in a single process in the development phase of a new car.

The device developed by the research team can be mounted on large machine tools that are often used at industrial sites, enabling the precision and rigidity of the machine tool to be used.

The research team is expecting to reduce time and costs if additional software is developed in the future.

With software installed, the time and cost of manufacturing large molds are expected to be reduced by more than 50 percent.

Furthermore, the research team believes the new technology can also be applied to finishing surfaces of medium and large metal and non-metallic products that are manufactured by 3D printing, casting, and welding.

Prof. Lee Sun-kyu of GIST, who led the research, said, “These results will help us secure a competitive edge in parts and equipment industries that are expected to be affected by the recent tightening of regulations on exports by the Japanese government.”

The professor further added, “In particular, we will be able to reduce the time and cost of developing new vehicles in the era of self-driving cars.”