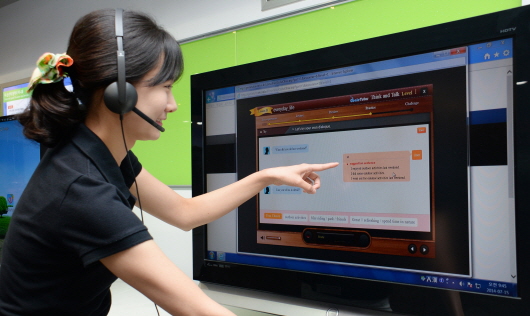 GenieTutor, among other things, can “exchange” talks with users depending on changing contextual situations, based on artificial intelligence technology.(image:ETRI)

SEOUL, July 21 (Korea Bizwire) – South Korea is famous for its obsession with English education. So passionate about improving English skills that there is a rising number of ‘English-only villages’ across the nation, including the Paju English Camp in Gyeonggi Province.

The volume of the nation’s private English education market is estimated at roughly 6 trillion won (US$ 6 billion) according to a local report, which is a huge opportunity for those from English-speaking countries.

Indeed, landing on an English teaching job as a “native speaker” is regarded as one of the best jobs in the country if you want to experience some teaching careers and enjoy traveling at the same time in this nation well known for the Korean Wave.

However, Korea is at the same time a country where technological advancements are announced every day. So expect bad news for those who aspire to teach English in South Korean schools or cram schools: ‘Human-like’ interactive English learning software — although in a development phase — has emerged threatening to replace the enviable job in the country’s educational market.

The Electronics and Telecommunications Research Institute (ETRI), one of South Korea’s science and technology research centers, has announced on July 17 that it successfully developed artificial intelligence-based interactive educational software which is dedicated to English learners.

There have been lots of such software programs which had their own bragging rights to claim their ‘most human-like educational features.’ But, ETRI’s new software — called “GenieTutor” — stands it apart from other similar programs in many aspects.

GenieTutor, among other things, can “exchange” talks with users depending on changing contextual situations, based on artificial intelligence technology. And when the user says grammatically wrong expressions or pronunciation, the computer tutor can evaluate the errors and correct it in giving it the most conspicuous edge in terms of improving English learning skills compared with others.

In fact, there were some ‘conversation-inducing’ English learning software tools in the market but they lack in offering personalized feedback firsthand in a “natural” way. This accomplishment was thanks to GenieTutor’s voice recognition and artificial intelligence technology which enables the computer to recognize and understand human languages depending on distinct context and situations. Moreover, the software can be best optimized for ‘uniquely’ Korean learners with distinct accent unlike any other non-English speakers in the world.

This technology is in its early stages; long and complicated talks like debate is not possible for now but currently is advanced enough to help users to build up basic level of English skills using vocabulary available at junior and high school levels.

ETRI said it is working on to make the software near perfect in light of enabling much complicated levels of interactive conversation between the computer and the learner. ETRI also expects this new kid on the English-education software field can contribute to cutting ever-rising private English education costs — the main culprit to putting a greater burden on the parents in this English-obsessed nation.