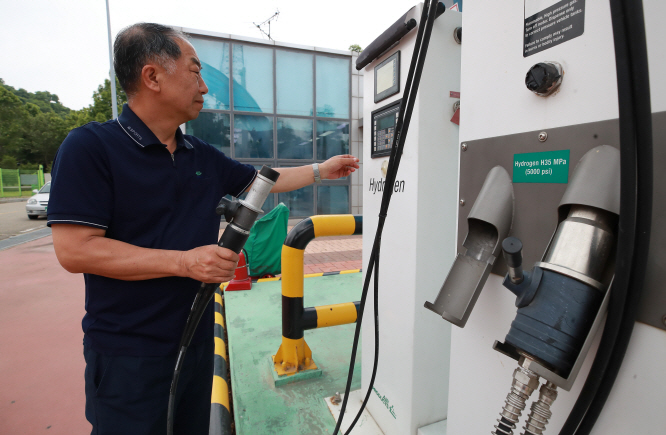 The government has decided to relax regulations that have been hindering the proliferation of hydrogen cars and to allow for various types of charging stations to be built. (image: Yonhap)

SEOUL, Nov. 16 (Korea Bizwire) — The South Korean government is expected to move forward with new policies that would permit the installation of hydrogen charging stations in semi-residential areas and commercial areas as well as the establishment of drone zones in currently prohibited airspace.

Such issues were addressed yesterday at the Central Government Complex in Seoul at a meeting presided by Prime Minister Lee Nak-yeon.

The prime minister said that hydrogen cars were not only expensive, but there were many regulations that deterred the installation of charging stations.

“Only around 590 hydrogen cars have been released into the market with only 13 charging stations available for use,” noted Lee.

To address this issue, the government has decided to relax regulations that have been hindering the proliferation of hydrogen cars and to allow for various types of charging stations to be built.

New regulations will allow hydrogen charging stations to be established in semi-residential and commercial areas in the future.

At present, charging stations can only be installed in residential and industrial zones. In semi-residential and commercial areas, there are 11 existing liquefied petroleum gas (LPG) stations that can incorporate hydrogen charging facilities.

Drones were another hot topic during the meeting. The government will be pushing for new drone-only zones where low-risk drones would be allowed to operate without a permit.

The airspace near the Korea Atomic Energy Research Institute in Daejeon is currently off limits to all aircraft, but the government plans to designate a few areas around the Geumgang river as drone-only zones so that drone producers and researchers at the Korea Aerospace Research Institute can test out new prototypes with ease.