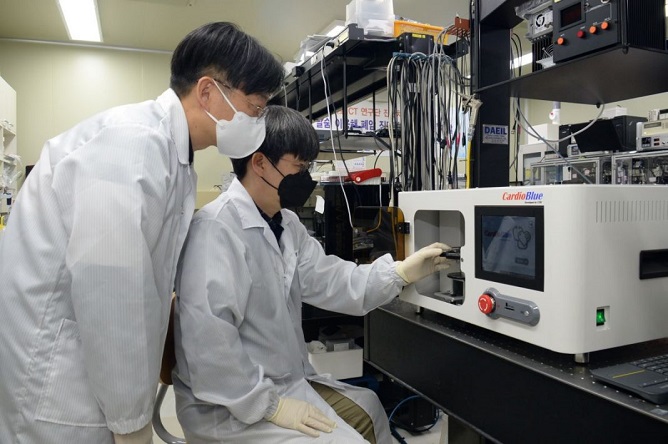 The device is as small as a microwave, which is much smaller and also more affordable than other systems available in the market. (image: ETRI)

DAEJEON, Nov. 4 (Korea Bizwire) — A South Korean research team has developed technology that can quickly diagnose the risk of a possible cardiovascular disease with a single drop of blood.

The Electronics and Telecommunications Research Institute (ETRI) announced Tuesday that it has developed a device that automatically analyses biomarkers, or biological indices that measure the severity of certain diseases, that can easily be used to look for cardiovascular diseases.

The device is capable of measuring five kinds of protein biomarkers that rise in concentration levels if a patient is suffering from atherosclerosis, hyperlipidemia, or a possible cardiac arrest.

A high-density antibody on the bio-chip’s surface translates various biomarkers in the blood into light with certain wavelengths to diagnose the symptom.

For instance, a high level of D-dimer, one of the biomarkers that indicates the risk of thrombosis, shows that there is a risk of a cardiovascular disease.

The new device also comes with centrifugation capabilities for pretreatment of blood samples.

The device is capable of pretreating 1-mililiter of blood in three minutes. It takes only 15 minutes to go through the entire process of blood sampling and diagnosis.

The device is as small as a microwave, which is much smaller and also more affordable than other systems available in the market.

Previously, it has taken at least two or three days to complete diagnosis. In smaller, local hospitals, it was harder to receive any treatment at all.