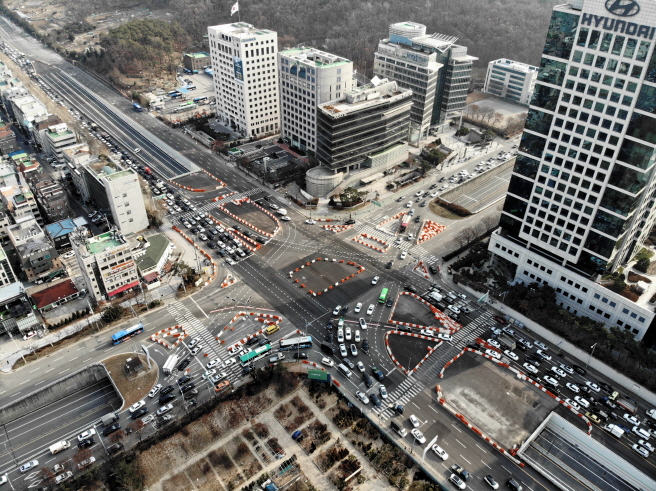 Starting with 50 in 2012, the government has selected 80 intersections every year since 2013 to improve the signal system and others. (Yonhap)

SEOUL, Jan. 7 (Korea Bizwire) — Improvements to the signal system at major intersections across the country have resulted in higher speeds for vehicle traffic.

The Korea Road Traffic Authority on Sunday selected 80 intersections in the country’s major urban areas where gridlock is severe or traffic accidents occur frequently, revealing the results of last year’s improvements to the signaling system.

The average time it takes to pass 1 kilometer around each intersection has been cut by 23.8 percent to 64.8 seconds from the previous 85.1 seconds.

In addition, an analysis of the traffic accident prediction program, known as surrogate safety assessment model (SSAM), developed by the U.S. Federal Highway Administration found that the annual traffic accidents in 80 locations will decrease by about 23.6 percent due to the easing of traffic congestion.

According to the Ministry of Land, Infrastructure and Transport’s “Investment Assessment Guidelines for Transportation Facilities,” the 80 locations were estimated to save about 40.7 billion won (US$34.9 million) every year as eased traffic jams cut fuel use and costs from tire wear.

Considering the time saved by drivers and reduced air pollutants due to the faster movement, economic benefits of about 212.4 billion won per year were analyzed.

Starting with 50 in 2012, the government has selected 80 intersections every year since 2013 to improve the signal system and others. It plans to select 80 locations this year for further improvements.