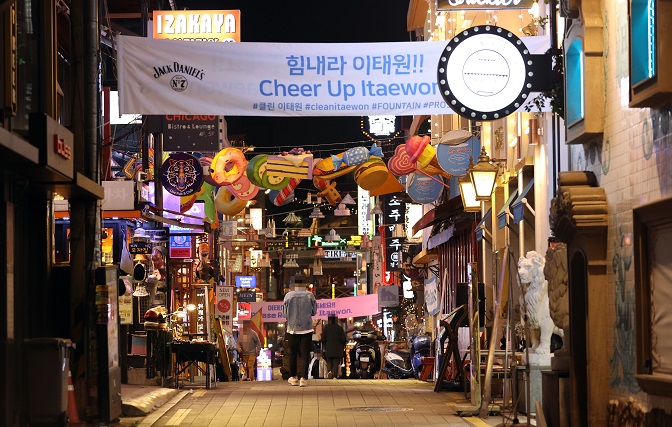 A street in Itaewon, a major nightlife district in Seoul, is relatively quiet on Oct. 29, 2020, two days before Halloween. (Yonhap)

The country added 114 more COVID-19 cases, including 93 domestic infections, raising the total caseload to 26,385, according to the Korea Disease Control and Prevention Agency (KDCA).

It marked a rise from 103 new cases reported Wednesday and a slight fall from 125 on Thursday, it said. An average number of daily new cases over the past two weeks came to 96.4.

The latest upticks were mostly traced to senior nursing homes, hospitals and other facilities, but sporadic group infections continued to rise at small gatherings, including family meetings not only in the wider Seoul area but across the country.

Since the country eased the social distancing scheme by one notch to the lowest level of a three-tier system on Oct. 12, the daily figures have showed ups and downs, hovering around 100.

Health authorities warned that the country’s virus cases may further pile up on a potential resurgence in virus infections as people travel to enjoy autumn vacation.

Halloween, set for Saturday, is also a major concern for health authorities as people could gather at entertainment facilities, a potential hotbed for cluster infections.

The country reported more than 270 COVID-19 cases tied to clubs in the nightlife district of Itaewon in early May.

Of the newly identified local infections Friday, 47 cases were reported in Seoul, 23 cases in Gyeonggi Province that surrounds the capital and two cases in Incheon, west of Seoul. The greater Seoul area is home to around half of the nation’s 51.6 million population. 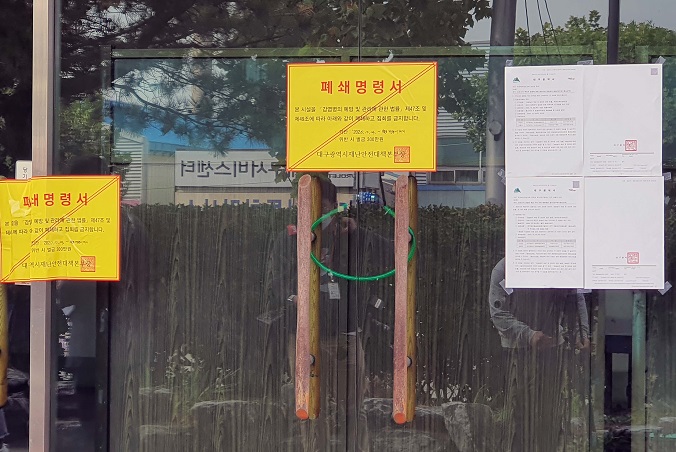 A sign at a church in the southeastern city of Daegu says it is closed on Oct. 30, 2020, after its members were confirmed with COVID-19. (Yonhap)

Virus cases traced to the golf gathering that took place on Oct. 17 came to 54, up three from a day earlier, the KDCA said.

The authorities earlier said they completed COVID-19 tests on all 800 people linked to the golf gathering and are closely monitoring those who had contact.

An elementary school in Pocheon, north of Seoul, has reported 16 virus cases so far, up one from the previous day,

A sauna in the Gangnam Ward of Seoul reported 11 more patients as of noon Thursday, raising the total caseload to 28.

A rehabilitation hospital in the central city of Yeoju had three more patients, bringing the total number to 38, the authorities said.

Cases traced to a nursing home in Namyangju, northeast of Seoul, reached 74, up two from the previous day. The facility was put under cohort isolation.

Cases at a hospital in Gwangju, Gyeonggi Province, reached 147, up six from a day earlier.

The country, meanwhile, added 21 imported cases, slightly up from 19 a day earlier, the KDCA said. Nine cases came from the United States, followed by eight from Asia, excluding China.

South Korea reported one additional death, raising the death toll to 463. The fatality rate was 1.75 percent.

The number of seriously or critically ill COVID-19 patients came to 51 as of midnight, down from 53 the previous day.

The total number of people released from quarantine after making full recoveries stood at 24,227, up 59 from the previous day.