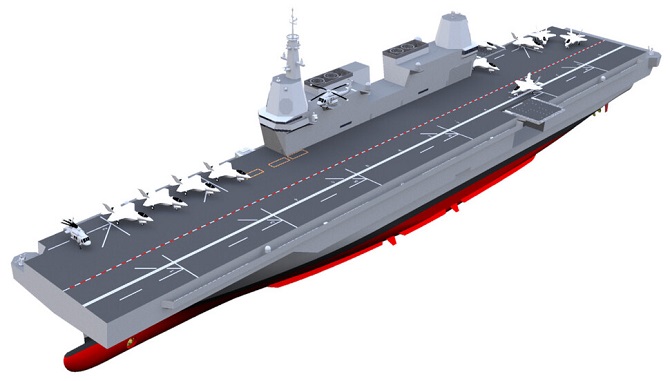 This image, provided by the defense ministry on Aug. 10, 2020, shows the envisioned light aircraft carrier South Korea is pushing to secure by 2033.

The military has been pushing to secure the 40,000-ton light aircraft carrier to “proactively respond to threats from all directions,” though some critics have raised questions about its cost-effectiveness.

During Tuesday’s meeting, military officials and researchers were to review plans for the development of technologies for the 2 trillion won (US$1.74 billion) project, according to the Defense Acquisition Program Administration.

“After its requirement was decided in July last year, experts from private, public and military sectors identified core technologies necessary to be secured because unlike other vessels, it will use vertical takeoff and landing (VTOL) jets,” the agency said in a release.

Technologies to be developed include those that other countries are unwilling to transfer, such as coating materials to protect the flying deck when VTOL aircraft exhaust over 1,000 degrees Celsius of heat, officials said.

Seven institutions, including the state-run Agency for Defense Development, Pusan National University and LIG Nex1 Co., will take part in the development.

The agency said it plans to wrap up the development of the core technologies by 2024.

Navy Chief of Staff Gen. Boo Suk-jung earlier said they will “thoroughly review diverse opinions and push for the project in the right direction.”