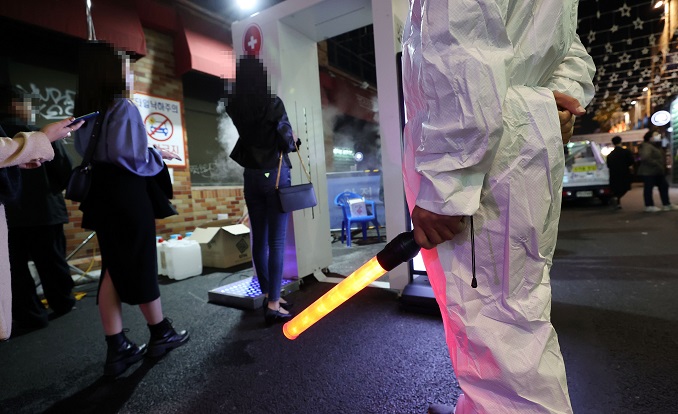 Pedestrians line up in front of a coronavirus-prevention gate at the entrance to the main street in Itaewon, a popular nightlife district in Seoul, on Oct. 30, 2020, as health authorities strengthen efforts to prevent the spread of COVID-19 one day before Halloween. To pass through the gate, people must sanitize their hands, get temperature checks and register with smartphone QR codes. (Yonhap)

The country added 127 more COVID-19 cases, including 96 domestic infections, raising the total caseload to 26,511, according to the Korea Disease Control and Prevention Agency (KDCA).

The latest upticks were mostly traced to senior nursing homes, hospitals and other facilities, but sporadic group infections continued to rise at small gatherings, including family meetings not only in the greater Seoul area but across the country.

Since the country eased the social distancing scheme by one notch to the lowest level of a three-tier system on Oct. 12, the daily figures have shown ups and downs, hovering around 100.

Health authorities warned that the country’s virus cases may further pile up on a potential resurgence in virus infections as people travel to enjoy autumn vacations.

Halloween, which falls on Saturday, is also a major concern for health authorities as people could gather at entertainment facilities, potential hotbeds for cluster infections.

The country reported more than 270 COVID-19 cases tied to clubs in the nightlife district of Itaewon in western Seoul in early May.

Of the newly identified local infections Friday, 51 cases were reported in Seoul, 23 cases in Gyeonggi Province that surrounds the capital and three cases in Incheon, west of Seoul. 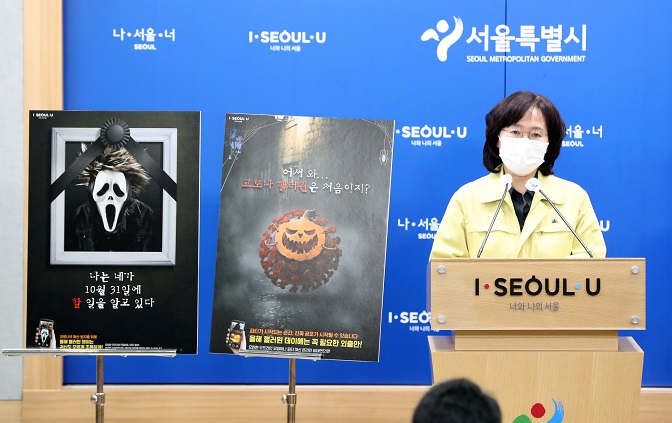 A poster, which says, “I know what you did on Oct. 31,” is displayed next to Park Yoo-mi, a senior official responsible for public health at the Seoul metropolitan government, as she holds a press conference at City Hall in Seoul on Oct. 28, 2020, telling people to refrain from gathering during the upcoming Halloween on Oct. 31 amid the coronavirus pandemic. (Yonhap)

A sauna in the Gangnam Ward of Seoul reported five more patients as of noon Thursday, raising the total caseload to 33.

A hospital in Songpa Ward in Seoul had eight more patients, bringing the total number to nine, the authorities said.

Cases traced to a fabric plant in Namyangju, northeast of Seoul, reached 28, up six from the previous day. The facility was put under cohort isolation.

Cases at a hospital in Gwangju, Gyeonggi Province, reached 150, up three from a day earlier.

The country, meanwhile, added 31 imported cases, up from 21 a day earlier, the KDCA said. Six cases came from the United States, two from Europe and 23 from Asia, excluding China.

South Korea reported one additional death, raising the death toll to 464. The fatality rate was 1.75 percent.

The number of seriously or critically ill COVID-19 patients came to 54 as of midnight, up from 51 the previous day.

KDCA said a total of 715 COVID-19 patients in critical condition have been given remdesivir, an experimental drug conventionally used for Ebola.

The total number of people released from quarantine after making full recoveries stood at 24,311, up 84 from the previous day.