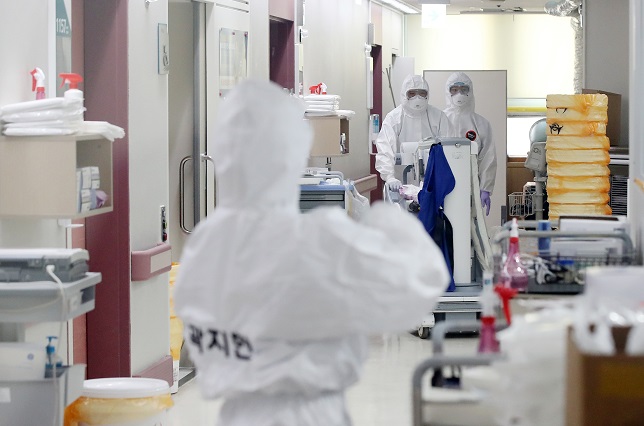 Medical workers wearing protective equipment work at a hospital for COVID-19 patients in Goyang, north of Seoul, on Feb. 10, 2021. (Yonhap)

The country added 444 more COVID-19 cases in the past 24 hours, including 414 local infections, raising the total caseload to 81,930, the Korea Disease Control and Prevention Agency (KDCA) said.

The figure was the highest since Feb. 4, when the nation recorded 451 new cases. It also marked a jump from Tuesday’s 371 new cases and Monday’s 289 new cases, which were the lowest daily infections since Nov. 23 last year.

Of the newly identified local infections, 169 cases were reported in Seoul and 157 cases in the surrounding Gyeonggi Province.

Incheon, 40 kilometers west of Seoul, reported 18 more cases. The three regions represent around half of the nation’s population.

The number of seriously or critically ill COVID-19 patients reached 184, down five from a day earlier.

The total number of people released from quarantine after making full recoveries was up 550 from the previous day to reach 72,226.

Since late last month, the daily caseload has been moving in the 300-400 range amid a string of cluster infections, with many traced to religious facilities, a dance hall and a cram school.

As of 9 p.m. Wednesday, 446 new coronavirus cases were reported nationwide, according to data compiled by health authorities and local governments, 34 more than 412 tallied at the same time on Tuesday.

In particular, 39 followers of a religious group were confirmed to be infected in connection with the group’s facilities in Bucheon, a Gyeonggi Province city southwest of Seoul, city officials said.

In general, new virus infections have been slowing down since the third wave of the pandemic peaked at a record high of 1,241 daily cases on Dec. 25. 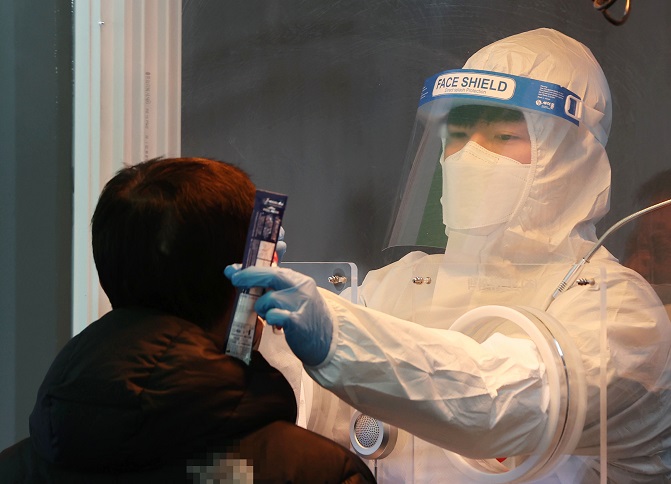 Yoon Tae-ho, a senior official at the Ministry of Health and Welfare, told reporters that a downward trend of the third wave showed signs of stalling.

Yoon said the reproduction rate of COVID-19 recently rose above 1, which means the outbreak is spreading, in the greater Seoul area. The rate measures the number of people that the average patient infects.

“It is not a situation where the third wave has been stabilized,” Yoon said.

Health authorities are on high alert ahead of the Lunar New Year holiday that runs from Thursday to Saturday. Millions of South Koreans normally travel across the country to visit their relatives and families.

To contain the spread of the virus, social distancing guidelines, including the ban on gatherings of five or more people, will be maintained through Sunday.

Health authorities plan to announce whether to lower the current virus curbs, the second-highest in the five-tier scheme, over the weekend.

South Korea will start vaccinating its population against COVID-19 on Feb. 26 as the final approval for the use of AstraZeneca’s vaccine for elderly people was given earlier in the day.

South Korea has so far identified 80 cases of COVID-19 variants, known to be much more contagious.

To prevent the variants from spreading, health authorities will tighten containment efforts for all incoming travelers, the KDCA said.

Also, they will be required to get a PCR test upon their arrival in South Korea and another when they are released from quarantine, the KDCA said.