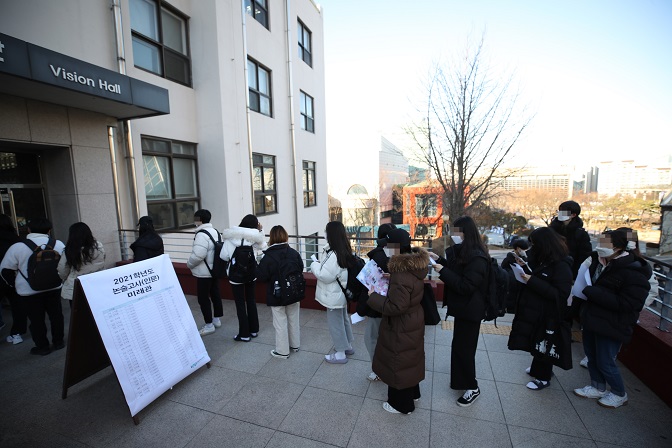 Exam takers wait in line to receive body temperature checks before entering a building at Soongsil University in Seoul on Dec. 4, 2020, to take the school’s essay test as part of a procedure to gain admission to the university. The essay test came one day after they sat for the state-administrated scholastic aptitude test. (Yonhap)

The country added 629 more COVID-19 cases, including 600 local infections, raising the total caseload to 36,332, according to the Korea Disease Control and Prevention Agency (KDCA). It reported seven additional coronavirus fatalities, bringing the total to 536.

An additional 439 COVID-19 infections have been confirmed across South Korea as of 6 p.m. Friday, according to health authorities and local governments.

The tentatively compiled figure was about 60 more than the tally registered during the same time period a day earlier, raising the possibility that daily cases could exceed 600 again, given that there are several hours left until midnight.

What is more concerning is that the greater Seoul area, home to half of the country’s population, has been witnessing its daily new cases soar to a record high for the past few days.

The number of daily locally transmitted cases is the third-highest total, another sign that the country is under a critical alert over a bigger wave of the pandemic coming during the winter, the authorities said.

Also, college entrance exams, which nearly half a million high school students and others took on Thursday, could serve as another source of infections, they added.

Prime Minister Chung Sye-kyun said the government will monitor the current pace until the weekend before deciding on whether to adopt additional measures on Sunday.

“The number of COVID-19 cases is again on an upward momentum, and the crisis is continuing,” Chung said, adding that the greater Seoul area shows no signs of declines despite adopting enhanced Level 2 social distancing measures 10 days ago.

The authorities said they will designate Dec. 7 to Jan. 3 as a special period to strengthen quarantining amid concerns over year-end gatherings and parties.

South Korea reported more than 500 daily new infections for three consecutive days through Saturday last week, before briefly falling back to 450 cases Sunday due to less testing over the weekend.

The increase in daily cases stayed above 500 for the second consecutive day Thursday.

Authorities have repeatedly warned of a possible surge in virus cases during winter, urging people to follow elevated antivirus measures that have been in place since Tuesday.

They also warned that the country could report daily virus cases of between 700 and 1,000 in the next one or two weeks unless the current pace is curbed, as the country continues to report sporadic infection clusters from private gatherings, virus-prone facilities.

Health experts said the country should elevate the current social distancing Level 2 of its five-tier system by at least half a notch as the current level is ineffective. 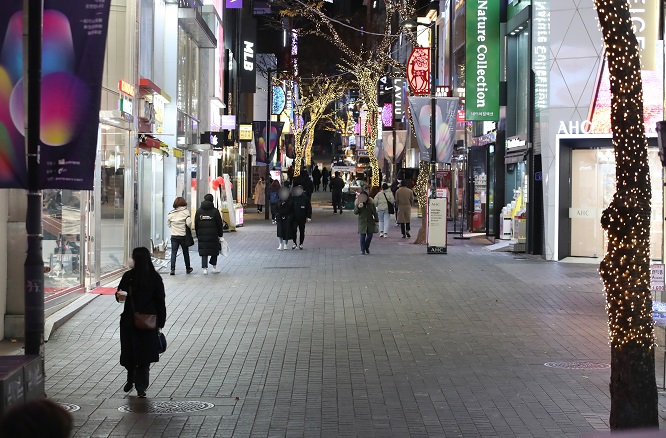 A street in Myeongdong, a popular tourist and shopping district in Seoul, is quiet due to the impact of the new coronavirus on Dec. 3, 2020. (Yonhap)

By region, 291 new virus cases were reported in Seoul, 155 cases in Gyeonggi Province that surrounds the capital and 17 cases in Incheon, west of Seoul, accounting for more than 77 percent of the country’s daily new locally transmitted cases.

Noticeably, the Seoul metropolitan area posted the largest number ever for the city since the start of the coronavirus outbreak earlier this year.

The Seoul city government said it will reduce bus and subway services by 30 percent after 9 p.m. to help curb the spread of the coronavirus.

Also, stores, movie theaters and various other facilities will have to close down after 9 p.m., the city government said. Only small-sized vendors and takeout at restaurants will be allowed.

Other municipalities reported new infections, with the southern port city of Busan reporting 31 cases, followed by South Chungcheong Province with 23 new cases and the central city of Daejeon with 21.

A total of 137 new cases were reported outside of the greater Seoul area Friday, exceeding the 100 mark every day since Nov. 24, except for Thursday.

Various cluster cases occurred across the country, with 11 more patients reported in connection with a hospital in northern Seoul, bringing the total caseload to 12, the KDCA said.

A restaurant located in central Seoul reported 33 new patients, and a dance academy in western Seoul added 21 more cases, bringing the total to 240.

The number of seriously or critically ill COVID-19 patients came to 116 as of midnight, the KDCA said.

The country added 29 imported cases, up from 24 a day earlier, coming mainly from the United States and Asian countries, excluding China, the KDCA said.

The total number of people released from quarantine after making full recoveries stood at 28,661, up 259 from the previous day.