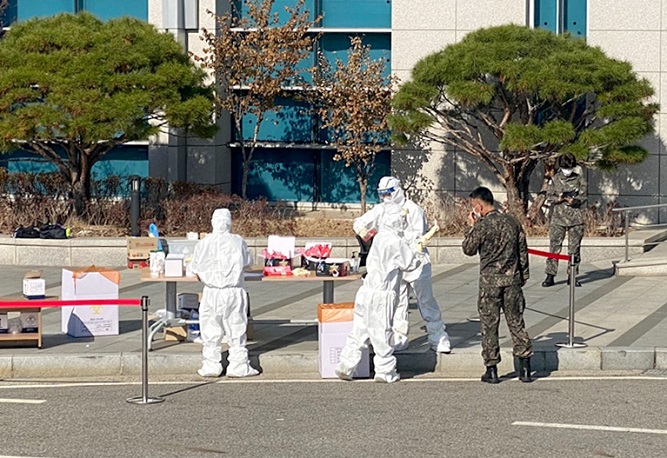 A drive-thru COVID-19 check-up center is being installed at the Ministry of Defense in Seoul on Nov. 11, 2020. (Yonhap)

The country added 146 more COVID-19 cases, including 113 local infections, raising the total caseload to 27,799, according to the Korea Disease Control and Prevention Agency (KDCA).

The daily caseload marks the highest since the 155 cases added on Oct. 23, and a sharp rise from 100 added Tuesday and 126 cases from Monday.

But sporadic cluster infections piled up across the nation, prompting more regional governments to raise their own virus curbs in advance.

Health authorities warned that the measures may be expanded nationwide if the current level of daily infections continues for two or three weeks.

People will still be allowed to carry on with most of their daily routine under Level 1.5, but some large-sized gatherings of 100 or more people will be regulated, though it is not a complete ban.

South Korea has been grappling with cluster infections not only from high-risk facilities, such as hospitals, but also from private gatherings and offices, which have hindered health authorities’ efforts to track virus transmission routes.

Over the past two weeks, around 35.1 percent of the newly added cases have been grouped as cluster infections, with around 12.9 percent not having clear transmission routes, the data showed.

Among the locally transmitted cases, the capital city of Seoul accounted for 39 cases, and Gyeonggi Province that surrounds Seoul reported 42. The greater Seoul area houses around half of the nation’s population.

An insurance firm in western Seoul reported 43 patients as of Wednesday noon, up seven from a day earlier.

Cases from a group of medical facilities and senior homes in Gunpo, south of Seoul, came to 133, up two from the previous day.

A total of 23 cases were traced to a medical instrument sales firm from Wonju, 132 kilometers east of Seoul, up six from Tuesday. 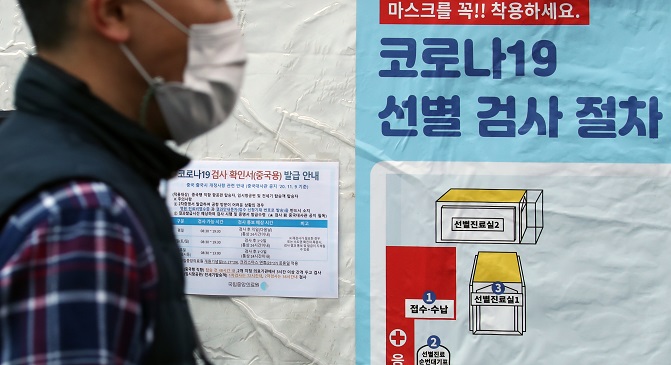 Currently, the reproduction rate, which reflects the number of people that a single patient can infect, is slightly above one.

“If the current level of infections continues, we may have to raise the social-distancing schemes in two or three weeks,” Sohn Young-rae, a senior health official, said in a daily briefing.

The official said silent spreaders can lead to another resurgence of COVID-19 cases.

Over the past week, South Korea’s average daily new infections came to 99.7, while the capital area’s reached 67.

Health authorities said they had found 38 virus cases at virus-vulnerable facilities, including nursing homes and psychiatric hospitals, after carrying out tests on those who work and stay at such facilities.

Starting Friday, South Korea plans to slap fines of 100,000 won (US$89) or less on people who don’t wear protective masks at public places.

The designated places include restaurants, cafes, saunas, public transportation, along with other sports or religious events.

The United States accounted for 12 cases, trailed by Uzbekistan with five patients. India, Russia, Hungary, Germany, and Romania were responsible for two cases each.

There were imported cases from Indonesia, Myanmar, Mexico, Zambia, and Algeria as well.

The number of seriously or critically ill COVID-19 patients came to 49, down five from Tuesday.

The fatality rate came to 1.75 percent.

The number of people released from quarantine after making full recoveries stood at 25,266, up 106 from the previous day. Around 90.8 percent of the patients reported here have been cured.