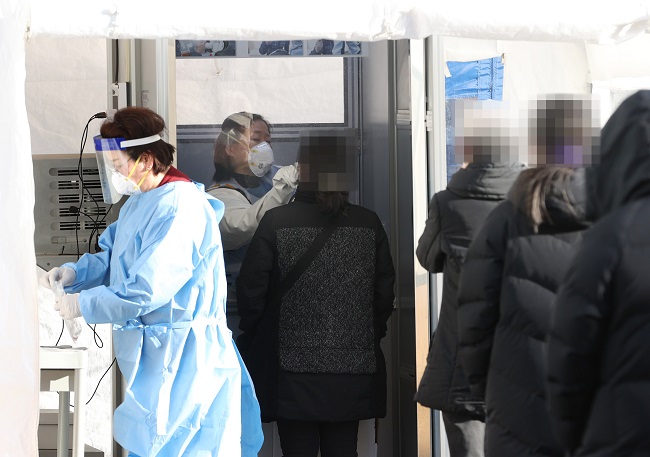 The country added 289 more COVID-19 cases in the past 24 hours, including 264 local infections, raising the total caseload to 81,185, the Korea Disease Control and Prevention Agency (KDCA) said.

It marked the lowest daily infections since Nov. 23 last year, when the nation began grappling with a resurgence in COVID-19 cases.

As of 6 p.m., the country had added 202 more cases, down 48 from the same time Sunday, according to health authorities and local governments. New cases are counted until midnight each day and announced the next morning.

Since late last month, the local daily caseload has been moving in the 300-400 range due to cluster infections from unauthorized education facilities run by a Christian missionary group in the central and southwestern regions.

New virus infections have been slowing down since the third wave of the pandemic peaked at a record high of 1,241 daily cases on Dec. 25.

With small business owners strongly protesting the country’s tough social distancing scheme, which currently bans restaurants from having dine-in customers after 9 p.m., a revised guideline is implemented from Monday.

The new rules will extend operating hours of restaurants, cafes, bars and fitness clubs outside the Seoul metropolitan region by one hour to 10 p.m. The 9 p.m. closing will be maintained for Seoul and the surrounding areas.

Health authorities, however, are on high alert ahead of the Lunar New Year holiday that runs from Thursday to Saturday. Millions of South Koreans normally travel across the country to visit their relatives and families.

Accordingly, other social distancing guidelines, including the ban on gatherings of five or more people, will be maintained through next Sunday.

South Korea operates a five-tier alert system. The capital area is currently under the second-highest level of 2.5, while Level 2 is imposed in other areas.

South Korea also has so far identified 54 cases of COVID-19 variants, known to be much more contagious.

Starting Feb. 22, South Korea will require all incoming passengers from Africa to show a negative result from a polymerase chain reaction (PCR) testing, the KDCA said.

All incoming passengers from Africa will also be required to be quarantined and get PCR tests in South Korea, the KDCA said in a statement.

So far, such measures have been applied to foreign visitors since January, the KDCA said. 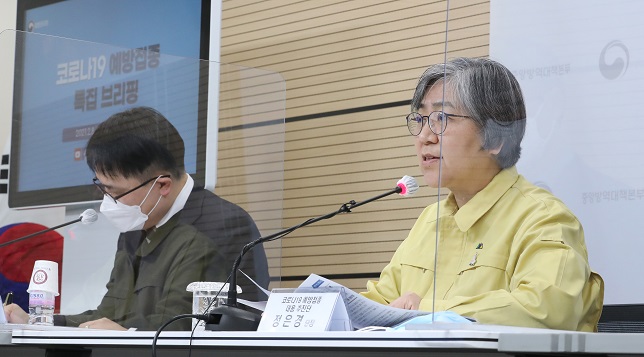 Last week, the Ministry of Food and Drug Safety approved the special import of 117,000 doses of Pfizer’s vaccine, which the nation plans to bring in this month through the COVAX Facility, the World Health Organization’s global vaccine provision program.

The KDCA said it will conduct a mock drill Tuesday for the nation’s vaccination roll-out.

KDCA Commissioner Jeong Eun-kyeong said in a briefing that 1.5 million doses of AstraZeneca Plc.’s COVID-19 vaccine will be the first batch of vaccines to be provided in the final week of this month.

In a parliamentary meeting, Prime Minister Chung Sye-kyun said he expects the first phase of inoculation will begin as soon as AstraZeneca’s vaccines are delivered on Feb. 24.

SK Bioscience Co., a vaccine unit of South Korea’s SK Group, has been manufacturing AstraZeneca’s vaccine at a local factory.

At least 2.71 million doses of coronavirus vaccines are expected to arrive in South Korea in the first half, health authorities have said.

“There are uncertainties over virus variants and supply of vaccines,” Jeong said. “We will continue to review the need to secure more vaccines.”

Of the newly identified local infections, 111 cases were reported in Seoul and 79 cases in the surrounding Gyeonggi Province. Incheon, 40 kilometers west of Seoul, reported 17 more cases. The three regions represent around half of the nation’s population.

As of Monday evening, Goyang city in northern Gyeonggi Province has reported a total of 11 cases linked to a dance hall and a nearby restaurant.

The number of seriously or critically ill COVID-19 patients reached 188, down two from a day earlier.

The total number of people released from quarantine after making full recoveries was up 353 from the previous day to reach 71,218.