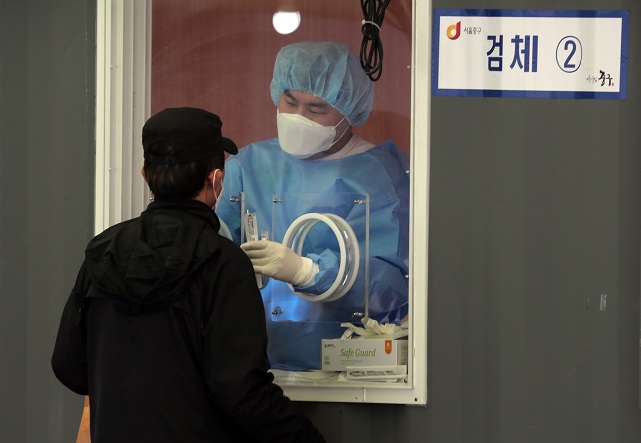 A citizen receives a COVID-19 test at a makeshift clinic in central Seoul on April 5, 2021. (Yonhap)

SEOUL, April 5 (Korea Bizwire) — South Korea’s daily new coronavirus cases fell back below 500 after six days on Monday on fewer tests over the weekend, but health authorities warned of enhanced social distancing rules amid growing concerns over a new wave of the pandemic.

The daily caseload has been hovering above 500 since Wednesday.

The country added four more deaths from COVID-19, increasing the total to 1,748. The fatality rate came to 1.65 percent.

As of 9 p.m., health authorities and local governments had reported 410 more cases across the country, five fewer than at the same time on Sunday. Daily new cases are counted until midnight and then announced the following morning.

South Korea has been under the third wave of infections since mid-November last year, peaking at a record high of 1,241 on Dec. 25.

Although the virus curve has flattened since then, the country has been experiencing sporadic cluster infections nationwide from various locations ranging from office buildings and restaurants to religious facilities.

Over the past week, the average daily new cases came to 477, up 55.7 from a seven-day period earlier.

Cluster infections accounted for 26 percent of the newly added cases over the past week, while transmission routes of 28.3 percent remained unknown.

The greater Seoul area, home to half of the country’s 51.7 million population, is currently under the Level 2 social distancing rules, effective until April 11. The rest of the country is under Level 1.5.

But authorities said that the country may have to adopt tougher distancing rules if the daily new cases do not show a significant letup, warning that the figure may jump over 1,000 if the current situation continues.

On Friday, South Korea plans to announce new social distancing guidelines that will be applied starting next Monday.

“The number of cases has been increasing since last week. We plan to closely monitor the situation this week before releasing the new social distancing levels,” Yoon Tae-ho, a senior health official, said during a meeting with reporters.

South Korea is especially concerned as more people are expected to travel across the nation over the spring season, with the spread of more transmissible variants straining the antivirus fight as well.

The country has identified a total of 330 cases of variants here since October last year, with 280 of them having originated from Britain, followed by South Africa with 42 and Brazil with eight.

Authorities said they have found the first local transmission of a variant from South Africa. 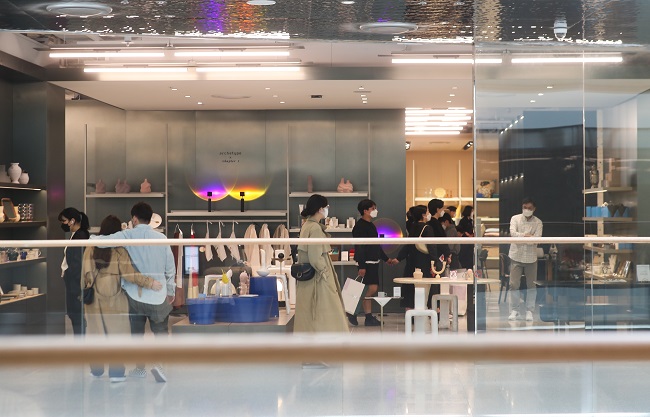 Since the country started its vaccination program on Feb. 26, a total of 962,730 people have been given COVID-19 vaccine shots, including 629 the previous day.

A total of 10,997 cases of side effects after vaccinations have been reported, but 98.6 percent were mild symptoms, including muscle pain and fever.

A total of 32 deaths after vaccinations have been reported, according to the KDCA.

South Korea aims to achieve herd immunity by November and seeks to complete vaccination of 12 million people by the end of June.

Another batch of 273 cases was tied to a bar in Busan, up 40 from the previous day.

Cases traced to a nationwide church group came to 134, up 63 from a day earlier.

The reproduction rate currently hovers above one nationwide, which indicates that a single COVID-19 patient transmits the disease to more than one person. Authorities say the figure indicates that daily new cases can hover above 500 at anytime.

Of the imported cases, the United States accounted for seven, followed by the Philippines with five. India accounted for two cases as well.

The number of patients with serious symptoms across the country reached 97, down two from the previous day, the KDCA said.

The total number of people released from quarantine after making full recoveries moved up 311 to 96,900. This indicates around 91.6 percent of the patients reported here being cured.