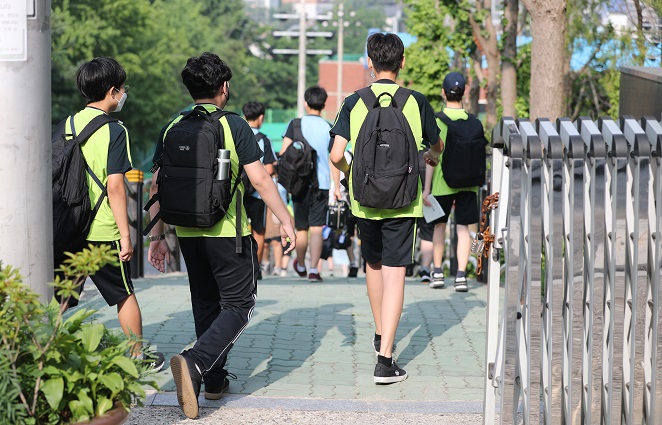 Students arrive at a middle school in Seoul on June 21, 2021, as health authorities are set to apply eased social distancing rules next month. (Yonhap)

As of 9 p.m. Monday, 324 additional infections were reported nationwide, down 21 from the same time the previous day, according to health authorities and local governments.

In its daily update to be announced on Tuesday morning, accordingly, the country is expected to report a number of new confirmed cases in the mid-300s.

In a daily briefing, the KDCA said the number of daily cases appears to be on the decline given the trend in the past two weeks.

“We expect daily infections will decline further in July given the country’s accelerating vaccination rate,” a KDCA official said.

But he remained cautious about a possible spike in new cases in the greater Seoul area next month due to the population density and increasing outdoor activities.

The move came as the country’s vaccination drive is gaining traction.

The nationwide ban on gatherings of five or more people will be lifted under the renewed guidelines, with the ceiling set to be raised to eight under Level 2. No restrictions are applied under Level 1.

In the greater Seoul area, the ceiling will initially be set at six people over a two-week transition period. 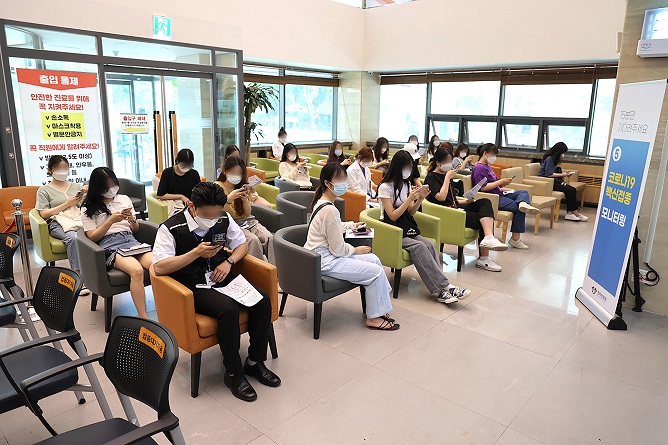 Amid the nationwide vaccination drive, a total of 15.01 million people, or 29.2 percent of the country’s 51.3 million population, have received their first shots of COVID-19 vaccines. Four million, or 7.9 percent of the population, were fully inoculated as of Monday.

The country aims to inoculate 36 million with at least one jab by September to achieve herd immunity in November.

South Korea has beefed up its vaccine arsenal, currently administering two-part vaccines from AstraZeneca and Pfizer, as well as Janssen’s single-dose vaccine. Moderna’s vaccine is set to be given soon after completing its approval process earlier last week.

Novavax’s vaccine will be introduced pending its approval.

The country has so far secured vaccines enough to inoculate around 100 million people.

Vaccination-related deaths rose eight to 298 as of Monday, but most of the accumulated 67,276 cases of side effects following inoculations were minor symptoms, such as nausea, mild fever and headache.

To prevent the spread of the Delta coronavirus variant, which was first detected in India, the agency said it will consider further strengthening quarantine measures against the variant.

KDCA Commissioner Jeong Eun-kyeong said the agency is closely monitoring the situation when it comes to the Delta variant and there is a need to strengthen quarantine measures against it.

According to authorities, most Delta virus cases are imported, a large portion of which were found in South Koreans who arrived last month from India

The Delta variant has been reported in more than 80 countries. More infectious than the Alpha variant, first identified in Britain, the Indian variant is raising concerns of further loss of lives and lockdowns.

Of the newly confirmed locally transmitted cases, 127 came from Seoul and 88 from Gyeonggi Province.

The KDCA counted 40 more imported cases, raising the tally to 9,568. Of the imported cases, Asian countries, excluding China, accounted for 33, followed by Africa with four cases, the United States with two and Europe with one.

The number of patients in serious or critical condition came to 137, down nine from the previous day.

The total number of people released from quarantine after making full recoveries was 143,268, up 369 from a day earlier.