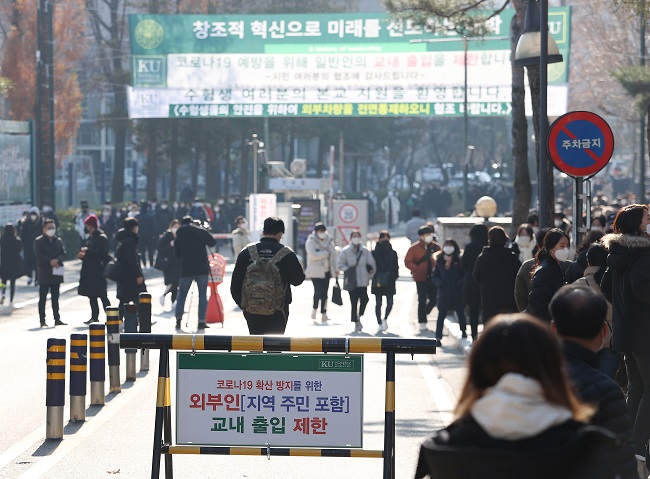 Exam takers leave Konkuk University in Seoul on Dec. 5, 2020, after taking the school’s essay test as part of a procedure to gain admission to the university. The essay test came two days after they sat for the state-administrated scholastic aptitude test. (Yonhap)

SEOUL, Dec. 5 (Korea Bizwire) — The daily number of new coronavirus cases in South Korea fell back to below 600 on Saturday, following a nine-month high the previous day, as authorities are considering adopting tighter antivirus restrictions as the country continues to witness various new cluster infections.

The country added 583 more COVID-19 cases, including 559 local infections, raising the total caseload to 36,915, according to the Korea Disease Control and Prevention Agency (KDCA). It reported four additional coronavirus fatalities, bringing the total to 540.

The authorities have said they will announce Sunday whether to elevate the current social distancing measures as the country is under a critical alert over a bigger wave of the pandemic amid the winter.

Unlike two previous outbreaks earlier this year, the latest surge is more difficult to contain as various sizes of cluster infections continue to pop up, the KDCA said.

The KDCA said the nation’s reproduction rate for COVID-19 reached 1.4 for last week, meaning that one patient infects 1.4 people.

South Korea reported more than 500 daily new infections for three consecutive days through last Saturday, before briefly falling back to 450 cases last Sunday due to less testing over the weekend.

The increase in daily cases stayed above 500 for the second consecutive day Thursday and topped the high from nine months ago Friday, with 629 cases.

Amid concerns that the country could face the biggest crisis to date, the authorities have said they will monitor the current pace and decide Sunday on whether to adopt additional measures after adopting enhancing Level 2 social distancing nearly two weeks ago.

What is more concerning is that the greater Seoul area, home to half of the country’s population, has been witnessing its daily new cases soar to a record high for the past few days.

On Friday, the Seoul city government announced that stores, theaters and multiple other facilities must close after 9 p.m. for two weeks. 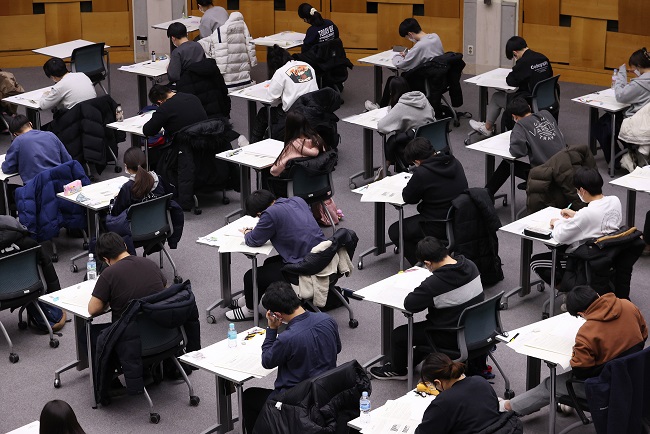 Applicants take an essay test at Konkuk University in Seoul on Dec. 5, 2020, in a follow-up college entrance exam after the state-administrated College Scholastic Ability Test on Dec. 3. They sit apart as a precaution against the coronavirus. (Yonhap)

By region, 231 new virus cases were reported in Seoul, 150 cases in Gyeonggi Province, which surrounds the capital, and 19 cases in Incheon, west of Seoul, together accounting for more than 77 percent of the country’s daily new locally transmitted cases.

Data by the city government of Seoul showed that the city’s accumulated COVID-19 cases surpassed 1 per 1,000 people as of Saturday.

Accumulated confirmed cases in Seoul came to 9,951, which accounts for more than 0.1 percent of the city’s 9.72 million population.

The infection tally of Seoul is on course to surpass 10,000 Sunday after the city added at least 160 more cases on Saturday, which will be counted into the tally the next day.

Other municipalities reported new infections, with the southern port city of Busan reporting 29 cases, followed by South Gyeongnam Province with 27.

A total of 159 new cases were reported outside of the greater Seoul area Saturday, exceeding the 100 mark every day since Nov. 24, except for Thursday.

Various cluster cases occurred across the country, ranging from those at restaurants and hospitals to schools.

The number of seriously or critically ill COVID-19 patients came to 121 as of midnight, the KDCA said.

The country added 24 imported cases, down from 29 a day earlier, coming mainly from the United States and Asian countries, excluding China, the KDCA said.

The total number of people released from quarantine after making full recoveries stood at 28,917, up 306 from the previous day.

According to quarantine authorities and municipalities, the country’s additional infections on Saturday came to 405 as of 6 p.m., likely putting it on course to post another daily tally of over 500 on Sunday, when the total cases confirmed the previous day will be announced.