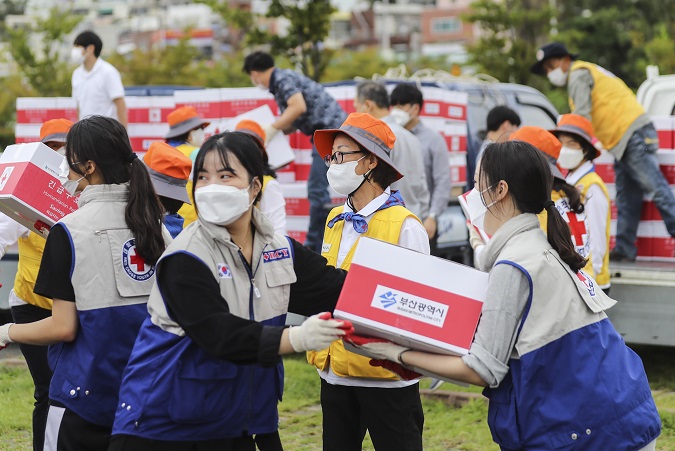 Volunteer workers carry supplies for people under quarantine due to the new coronavirus in the southern port city of Busan on Sept. 23, 2020. (Yonhap)

The country added 110 more COVID-19 cases, including 99 local infections, raising the total caseload to 23,216, according to the Korea Disease Control and Prevention Agency (KDCA).

Wednesday’s daily tally marks a sharp increase from 61 cases reported Tuesday, the lowest number since Aug. 13, when the comparable figure was 56. The country had reported less than 100 new virus cases for the third consecutive day since Sunday.

The country’s new daily infections had been in triple digits for more than a month since Aug. 14 due to cases tied to a church in Seoul and an anti-government rally before briefly falling below 100.

Health authorities said the daily new cases are showing signs of a decline but warned that it is a matter of time before the daily figures jump above the 100 threshold again due to the rising number of patients with unknown infection routes.

Over the past two weeks, 25.2 percent of the newly added cases had unknown infection routes as of Wednesday. Around 24.8 percent of additional patients were traced to group infections as well.

Against this backdrop, the country opted Sunday to extend the Level 2 social distancing scheme nationwide until Sept. 27.

The country operates a three-tier social distancing system. Under the second level, all indoor gatherings of 50 or more people are banned, while the ceiling is 100 for outdoor meetings.

The decision also came amid concerns that the spread of the virus may accelerate again during the upcoming Chuseok holiday, which runs from Sept. 30 to Oct. 4. Millions of South Koreans travel across the nation to meet their families and relatives during Chuseok.

South Korea will also have a three-day break from Oct. 9 to 11, when Hanguel Day, which celebrates the Korean alphabet, is combined with the weekend. 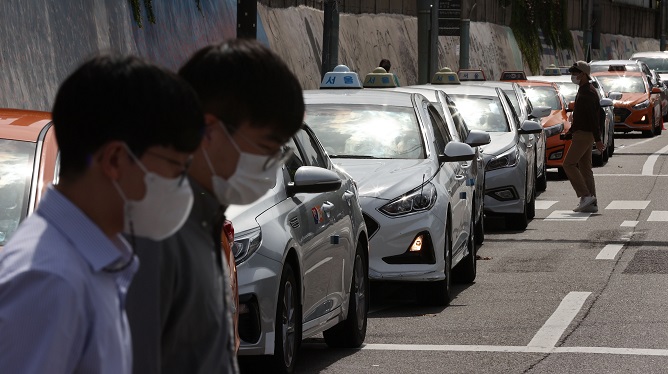 Health authorities have been urging people to stay home over the holidays.

“Over the Chuseok holiday, the country will continue operating makeshift checkup centers and join forces with private medical institutions as well to make sure that there are no delays in carrying out COVID-19 tests,” Kim Ganglip, a senior health official, said during a daily briefing.

Visits to senior care centers will remain banned over the holiday in a preventive measure.

South Korea has vowed to take actions against unauthorized rallies in central Seoul over Chuseok.

“There have been chains of infections from the protest on Aug. 15, with the related caseload reaching 622. It is inevitable to ban the protest to prevent the spread of the virus,” Kim said, warning that authorities will take stern actions against unauthorized gatherings.

A group of conservative activists has been planning to organize a rally in central Seoul on Oct. 3.

The southern resort island of Jeju will have all arrivals wear protective masks, and make it mandatory for people with fevers to receive COVID-19 tests.

Of the additional locally transmitted cases, 40 came from Seoul, and 28 were reported from the surrounding Gyeonggi Province. Incheon, located west of Seoul, added five more patients. 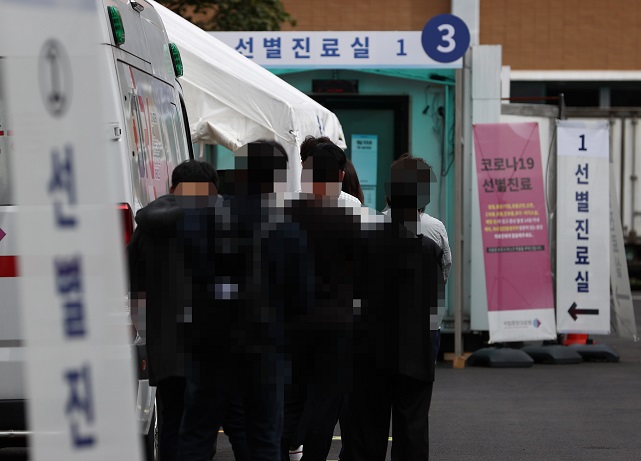 Infections tied to last month’s anti-government rallies came to 623 as of Wednesday, up just one from the previous day.

A sauna facility located in the Gwanak Ward of the capital city reached 16, up three from, a day earlier.

Two more patients were also traced to a residential building in southern Seoul, raising the total to 41.

A hospital from the southern port city of Pohang identified four more patients, with the related caseload reaching nine as of Wednesday.

The city of Goyang, northwest of Seoul, said 10 more patients at a residential mental health facility were confirmed to have the coronavirus Wednesday, increasing the total to 38 — 35 inpatients, two employees and one social worker — since the first case was reported on Sept. 15.

All but one case among inpatients occurred on the third floor, the city said.

The number of patients in serious or critical condition came to 139, down five from the previous day.

The number of imported cases came to 11.

Of the imported cases, Uzbekistan accounted for three infections. There were also patients traced to the Philippines, Qatar, Bangladesh, Britain and the United States.

The death toll remained unchanged at 388. The fatality rate came to 1.67 percent.

The rate, however, reached 21.17 percent for patients aged 80 and above.

A total of 20,650 people have been released from quarantine after making full recoveries, up 209 from the previous day. Nearly 89 percent of the patients reported here were cured.

The country’s daily COVID-19 cases peaked in February by reaching 909. Since last month, the highest figure was 441 cases added Aug. 27.