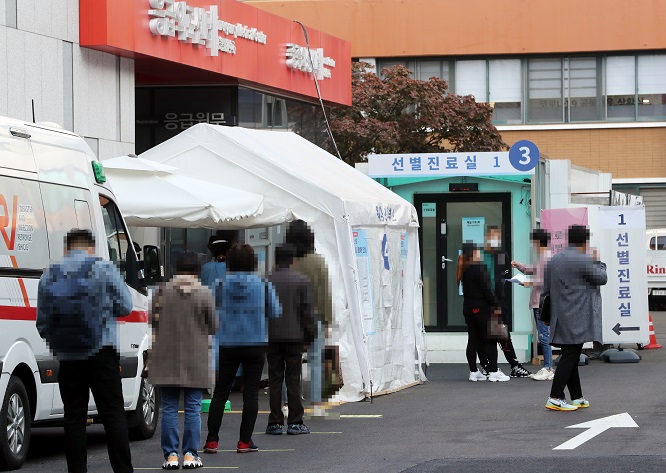 Visitors line up to receive new coronavirus tests at a makeshift clinic in central Seoul on Oct. 28, 2020. (Yonhhap)

The country added 103 more COVID-19 cases, including 96 domestic infections, raising the total caseload to 26,146, according to the Korea Disease Control and Prevention Agency (KDCA).

It marked a rise from 88 posted Tuesday but a slight decrease from 119 added Monday.

The latest upticks were mostly traced to senior nursing homes, hospitals and other medical facilities, but there have also been group infections from family meetings, a golf gathering and a day care center.

Since the country eased the social distancing scheme to the lowest level of a three-tier system on Oct. 12, which allowed people to resume most of their daily activities, the daily figures have gone up and down, hovering around 100.

“The country’s daily new infections are going through ups and downs, and the situation in the greater Seoul area is not good,” Yoon Tae-ho, a senior official from the health ministry, said during a briefing.

Health authorities warned that the country is currently at a critical juncture, as daily numbers may further pile up on a potential resurgence in virus cases as people travel to enjoy autumn vacation.

Halloween-related potential upticks are among concerns as well, as entertainment facilities have been considered hotbeds for cluster infections.

Shortly after bringing under control the spread of the virus stemming from a minor church sect in Daegu, whose caseload hovered above 5,000, the country faced another major infection cluster in greater Seoul in May, traced to clubs in the nightlife district of Itaewon.

Under the Level 1 social distancing scheme, clubs are allowed to operate as long as they follow basic guidelines, such as keeping entry logs.

When South Korea adopted the Level 2 policy, all entertainment businesses, including karaoke rooms, were ordered to fully shut down, regardless of the ceiling of 50 people for other shops and facilities.

Health authorities said a major infection cluster in the greater Seoul area could lead to another wave of the pandemic, as the metropolitan area houses around half of the nation’s population.

South Korea said it will resume its program to issue coupons for accommodations, tour packages and restaurants, to lend a hand to the virus-hit economy. 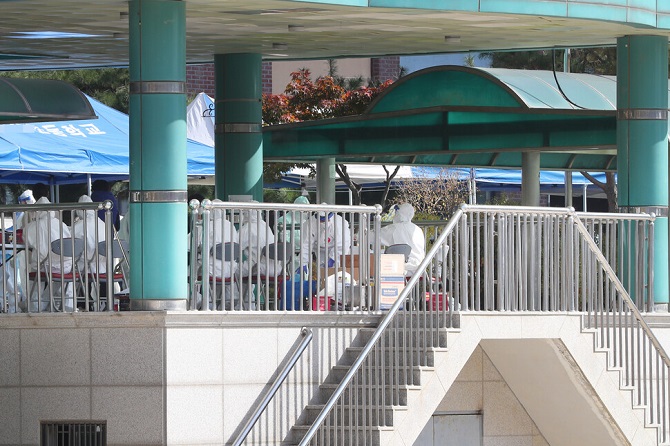 Quarantine officials at an elementary school in Pocheon, just north of Seoul, on Oct. 28, 2010 after eight COVID-19 cases were reported. (Yonhap)

Of the newly identified local infections, 23 cases were reported in Seoul and 28 cases in Gyeonggi Province that surrounds the capital.

Cases linked to a fashion company in Yongsan Ward in Seoul increased by seven, bringing the total caseload to eight, the KDCA said.

A golf gathering in Yongin, south of Seoul, which reported its first case last week, reported 11 more patients, bringing the total caseload to 42.

The authorities said they completed COVID-19 tests on all 800 people linked to the golf gathering.

A rehabilitation hospital in Yeoju had two more patients, bringing the total number to 32, the authorities said.

Cases traced to a nursing home in Namyangju, northeast of Seoul, reached 71, up nine from the previous day. The facility was put under cohort isolation.

The proportion of untraceable cases to the total fell to 10.9 percent over the past two weeks, down from 11.4 percent the previous two weeks, according to health authorities.

Two patients were from Ethiopia and the Philippines each. There were also cases from Jordan, Turkey and the Netherlands.

The number of seriously or critically ill COVID-19 patients remained unchanged at 52.

South Korea reported one additional death, raising the total to 461.

The number of people released from quarantine after making full recoveries stood at 24,073, up 92 from the previous day. More than 92 percent of the patients reported here have been cured.