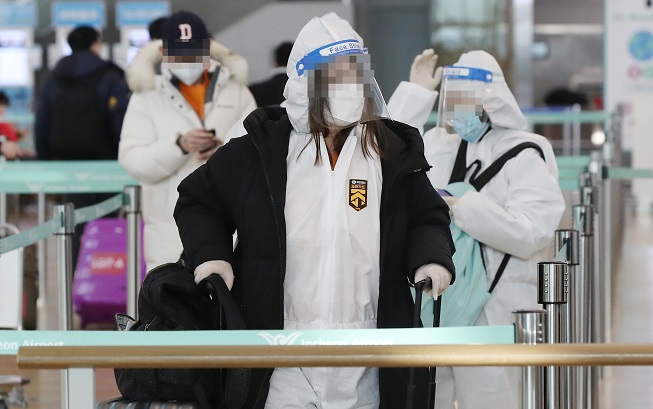 Passengers clad in protective gear wait at a check-in counter at Incheon International Airport, west of Seoul, on Jan. 14, 2021 (Yonhap)

SEOUL, Jan. 14 (Korea Bizwire) — The number of new coronavirus cases in South Korea stayed in the 500s for the third consecutive day Thursday, in yet another sign that the third wave of the pandemic has passed a peak on the back of tighter virus restrictions.

The country added 524 more COVID-19 cases, including 496 local infections, raising the total caseload to 70,728, according to the Korea Disease Control and Prevention Agency (KDCA).

It marked a slight drop from 562 posted Wednesday.

The country, touted as one of the most successful nations in containing the spread of the virus, has suffered from sporadic cluster infections across the country over the past weeks.

The country’s new virus cases reached a peak of 1,241 on Dec. 25, and daily figures had continued to breach the 1,000 threshold multiple times.

To cope with the soaring number of COVID-19 cases, health authorities have adopted the so-called Level 2.5 social distancing scheme, the second highest in the country’s five-tier scheme, in the greater Seoul area since Dec. 8.

The relatively moderate Level 2 social distancing policy has also been implemented in other areas.

The tightened measures will run through Sunday, and health authorities will decide on Saturday whether to maintain the current curbs or lower them.

But regardless of adjustments in the level of virus curbs, health authorities will ease restrictions on the so-called high-risk facilities, including gyms, karaoke establishments and cram schools.

South Korea, however, said it may have to keep in place the current ban on gatherings of five or more people. The regulation was implemented in the greater Seoul area since Dec. 24 and other regions from Jan. 4.

“We have reached a judgment that the ban cannot be lifted immediately,” Yoon Tae-ho, a senior health official, said during a meeting with reporters.

“Although the daily numbers hover around 500, it is still a lot compared with those from the first and second wave of the pandemic,” Yoon added, pointing out that an abrupt change in the social distancing scheme could lead to another uptick in new COVID-19 cases.

The KDCA said concerns over yet another resurgence of virus cases linger.

“It is significant that the numbers are on the downward trend without imposing the highest level of the social distancing scheme,” Kwon Jun-wook, a senior health official, said during a daily briefing.

“However, when the social distancing level is eased, we may face another uptick in the number of new cases,” he added. 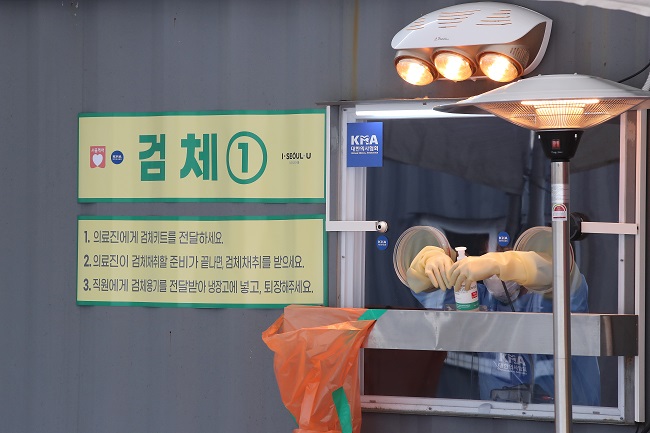 Medical officials prepare to carry out COVID-19 tests at a makeshift clinic in Seoul on Jan. 14, 2021. (Yonhap)

Over the past week, the reproduction rate, which reflects the number of people that a single patient can infect, came to 0.88.

Of the locally transmitted cases, the capital city of Seoul accounted for 131 cases, and the surrounding Gyeonggi Province took up 162. Incheon, west of Seoul, had 24 new cases. The greater Seoul area accounts for around half of the nation’s population.

The southeastern port city of Busan added 40 cases, and Gwangju, which lies 329 kilometers south of Seoul, accounted for 30 infections.

A nursing home in Gwangju added 16 more COVID-19 cases, raising the total to 137.

A total of 86 patients were tied to a meat processing factory in Yangju, west of Seoul.

BTJ Center for All Nations, a religious facility in North Gyeongsang Province that has also emerged as a new hotbed of the pandemic, reported 713 cases so far.

The United States accounted for seven cases, and Indonesia took up five. Three were from Tunisia.

The number of seriously or critically ill COVID-19 patients reached 380, up six from a day earlier.

The total number of people released from quarantine after making full recoveries was up 1,136 from the previous day to reach 55,772. This indicates nearly 79 percent of COVID-19 patients reported here being cured.

The country added it plans to administer a coronavirus treatment being developed by South Korean pharmaceutical giant Celltrion Inc. to high-risk patients when necessary before getting the final nod for use.

The government also said it has administered Gilead’s antiviral drug remdesivir to a total of 3,438 coronavirus patients in the country as of Thursday.