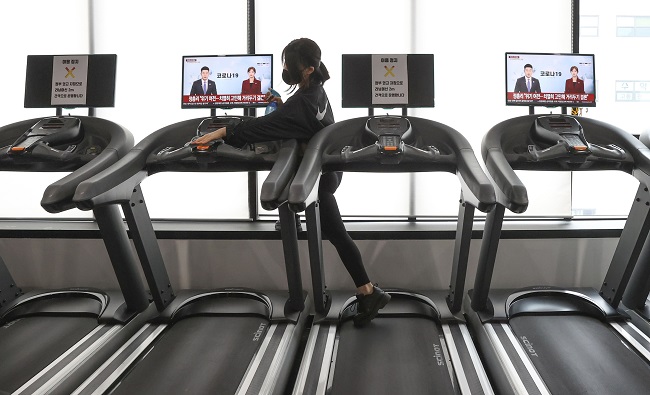 SEOUL, Jan. 16 (Korea Bizwire) — South Korea on Saturday eased restrictions on previously shuttered or scaled back businesses as the number of new coronavirus cases in the country stayed in the 500s for the fifth consecutive day.

The country added 580 more COVID-19 cases, including 547 local infections, raising the total caseload to 71,820, according to the Korea Disease Control and Prevention Agency (KDCA).

Restrictions on cafes and houses of worship will also be eased in response to criticism that they are excessive, Chung said.

At a press briefing, health officials added that the government has designated Feb. 1-14 as a special antivirus period for the Lunar New Year, which falls on Feb. 12 this year.

The government is looking into charging toll fees on expressways to discourage travel during that period, according to the officials with the Central Disaster and Safety Countermeasure Headquarters.

In recent years, the government made highways toll free during Lunar New Year’s Day and the fall harvest Chuseok holiday as part of efforts to promote traveling and domestic consumption.

The third wave of the pandemic began in mid-November, pushing the daily infection count up to a peak of 1,241 on Dec. 25. The daily figure breached the 1,000 threshold multiple times.

To cope with the soaring number of COVID-19 cases, health authorities adopted Level 2.5 in the greater Seoul area and Level 2 in other parts of the country on Dec. 8. 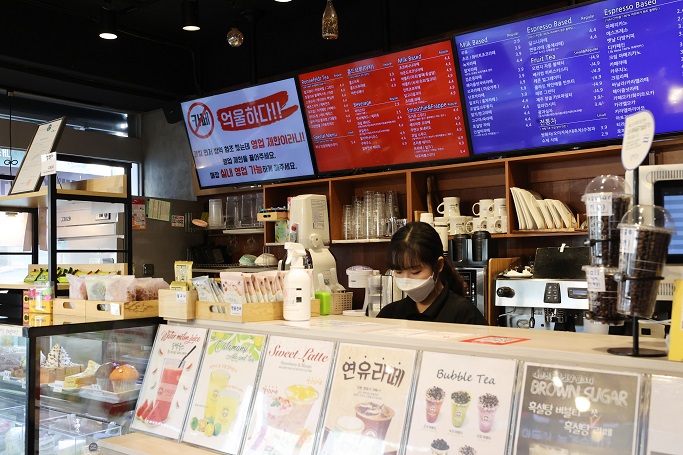 This file photo shows a sign (top left) criticizing the government’s COVID-19 business restrictions at a cafe in southern Seoul on Jan. 6, 2021. (Yonhap)

Of the locally transmitted cases, the capital city of Seoul accounted for 148 cases, and the surrounding Gyeonggi Province took up 163. Incheon, west of Seoul, had 30 new cases.

The greater Seoul area accounts for around half of the nation’s 51 million population.

Outside of greater Seoul, the southeastern port city of Busan reported 59 additional cases, followed by Daegu with 23 and Gangwon Province with 22.

The BTJ Center for All Nations, a religious facility in North Gyeongsang Province that recently emerged as a hotbed of infections, added 27 more cases for an accumulated total of 756, according to the health authorities.

The Dongbu Detention Center in eastern Seoul added three more for a total of 1,221.

The number of infections related to a train station in Seoul’s Dongdaemun Ward increased to 12, and those related to a private gathering in Incheon to 15.

A church in Osan, 55 kilometers south of Seoul, reported a total of 14 COVID-19 patients, while a kindergarten in Daegu, 302 km southeast of the capital, reported eight.

Of the total confirmed cases, 33 were imported from abroad, up from 29 a day earlier.

The number of seriously or critically ill COVID-19 patients came to 360, down 14 from a day earlier.

The total number of people released from quarantine after making full recoveries was up 1,018 from the previous day to reach 57,554.

Later in the day, health authorities and local governments said 396 new cases were confirmed from 12 a.m. to 6 p.m. Saturday, 35 fewer than at the same time the previous day. The greater Seoul area accounted for 69.4 percent with 275 cases.