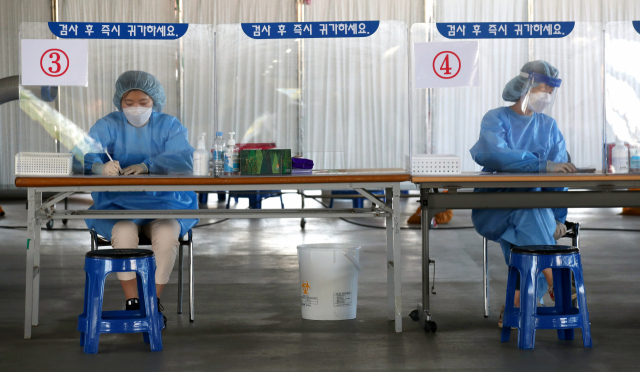 Medical staff members get ready to carry out new coronavirus tests at a makeshift clinic in the southern city of Gwangju on Sept. 28, 2020. (Yonhap)

SEOUL, Sept. 28 (Korea Bizwire) — South Korea’s new coronavirus cases increased by the smallest number in nearly two months Monday, but the country continues to step up its virus fight ahead of a major holiday later this week.

The country added 50 more COVID-19 cases, including 40 local infections, bringing the total caseload to 23,661, according to the Korea Disease Control and Prevention Agency (KDCA).

The daily new cases are the lowest in 48 days since Aug. 11 when 34 cases were reported, just before a new cluster of infections emerged from a church and an anti-government rally in Seoul on Aug. 15.

The daily new number is also sharply down from 95 a day earlier, but the fall in daily virus cases also came as virus tests tend to be fewer over the weekend than on weekdays.

Daily new local infections stayed in double digits for the fourth straight day after the country reported 95 on Friday, 49 on Saturday and 73 on Sunday, the KDCA said.

The number of daily new infections bounced back to over 100 Wednesday and stayed over 100 Thursday and Friday. The number fell below 100 Saturday.

Despite the fall in new virus cases, health authorities still remain vigilant just ahead of the Chuseok holiday, the Korean equivalent of Thanksgiving, later this week when tens of millions of people are expected to travel across the country.

The government has designated Monday to Oct. 11 as a special period for strengthened virus curbs as many people are expected to travel during the holiday that runs from Wednesday to Sunday.

“There are concerns over possible new outbreaks during the holiday through family gatherings and travel,” KDCA Director Jeong Eun-kyeong said in a press briefing.

The country also has a three-day break from Oct. 9 to 11, when Hangeul Day, which celebrates the Korean alphabet, is combined with the weekend.

“The number of local infections is on a downward trend but is still fluctuating,” Health Minister Park Neunghoo said in a regular government COVID-19 response meeting earlier in the day.

Health authorities have been urging people to stay home over the holidays, but to better contain local transmissions of COVID-19, they unveiled more tailored guidelines last week under the Level 2 distancing in the country’s three-tier social distancing scheme. 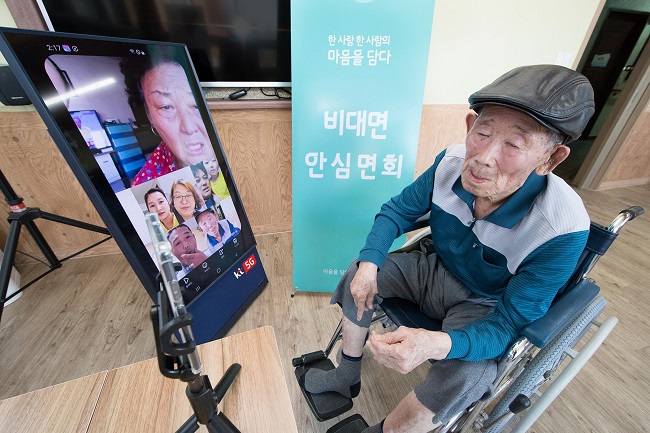 An elderly man talks with his family members via KT Corp.’s Narle service, a high-definition group video chat service, at a nursing home amid the global coronavirus pandemic, in this photo released by the telecommunication service provider on Sept. 28, 2020.

By region, Seoul added 19 new virus cases, and nearby Gyeonggi Province and Incheon saw 13 and one new patients, respectively, according to the KDCA.

Later in the day, the capital city said eight new cases were confirmed Monday, which were not yet reflected on the official tally.

Cases with unknown infection routes accounted for 20.9 percent of the newly added infections over the past two weeks. Cluster infections took up 33.1 percent, the KCDA data showed.

Cases traced to a nursing hospital in Seoul’s northern ward of Dobong came to 27, up three from a day earlier, the authorities said. Five more infections tied to a gym in Seoul’s western ward of Gwanak were recorded, bringing the total to 29.

Health authorities also cautioned against a potential so-called twindemic as the winter season approaches, as respiratory viruses, including influenza and COVID-19, have nearly identical symptoms.

A total of three people were confirmed to have both the COVID-19 virus and seasonal flu virus, but their symptoms are mild, they said.

The number of seriously or critically ill COVID-19 patients stood at 120 as of midnight, down four from the previous day, according to the authorities.

The country also reported 10 new imported cases, sharply down from 22 a day earlier, the KDCA said.

The total number of people released from quarantine after making full recoveries stood at 21,292, up 44 from the previous day.