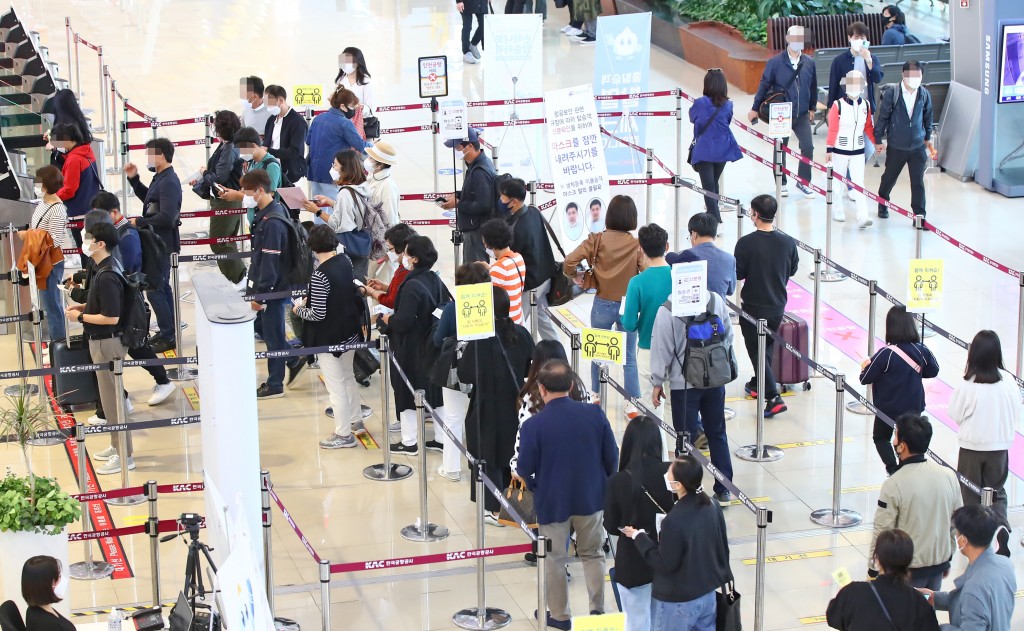 Passengers line up to get their boarding passes at Gimpo International Airport for a flight to South Korea’s resort island of Jeju on Oct. 15, 2021, when the government announced eased social distancing rules that will be applied for the next two weeks. (Yonhap)

The country added 1,684 more COVID-19 cases, including 1,670 local infections, raising the total caseload to 339,361, according to the Korea Disease Control and Prevention Agency (KDCA).

The daily caseload was down 256 from Thursday.

New COVID-19 infections have been on the decline for a third consecutive week as the country’s vaccination rate rose, the authorities said.

The country added eight more deaths from COVID-19, raising the death toll to 2,626. The fatality rate was 0.78 percent.

As of 9 p.m. Friday, health authorities and local governments had reported 1,488 more COVID-19 cases, down 24 from the same time Thursday.

The government announced a new set of eased social distancing rules as South Korea prepares for a “living with COVID-19″ scheme next month, in which the virus will be treated as an infectious respiratory disease like seasonal influenza.

“We hope this will be our last adjustment in social distancing so that we can start a gradual return to normalcy in phases in November,” Prime Minister Kim Boo-kyum said.

“To relieve the pain of small business owners and merchants, we will make some changes to the virus curbs.” 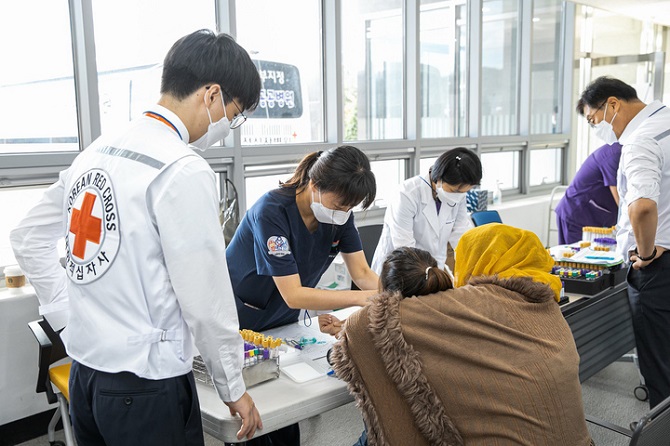 Evacuees from Afghanistan undergo medical examinations by Korean Red Cross medical staff at the National Human Resources Development Institute in the central county of Jincheon on Oct. 13, 2021, in this photo released by the Korean Red Cross on Oct. 15.

Under the renewed plan that will go into effect Monday, the greater Seoul area — home to half of the country’s population of 52 million — will remain under the toughest social distancing of Level 4, while the rest of the country will be under Level 3.

Still, the government said it will allow social gatherings of a maximum of eight people, up from the current cap of six, in the capital area after 6 p.m. if four of them are fully vaccinated.

Such a relaxed curb will be applied to all multiuse facilities in addition to cafes and restaurants.

A maximum of 10 people, including six fully vaccinated people, will be allowed in other areas.

The KDCA said 40.24 million people, or 78.4 percent of the country’s population, have received their first shots of COVID-19 vaccines and the number of fully vaccinated people stands at 32.08 million, or 62.5 percent.

The number of patients with serious symptoms across the country reached 371, unchanged from the previous day, the KDCA said.

The total number of people released from quarantine after making full recoveries came to 305,851, up 2,132 from a day earlier.